Four times Olympian Robert de Castella is the only Australian runner to have placed in the top 10 marathon finishers at three straight Olympics. He dominated the world marathon scene throughout the 80’s and was voted the world’s best marathon runner for that decade.  Although he never won an Olympic medal, he finished in the top ten on three of his four attempts. 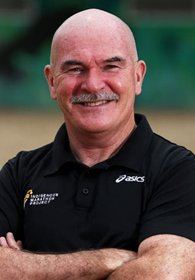 Excellent… A consummate professional and a tireless worker. Deek is a model example to us all. Rob was not only an inspiring and interesting speaker, he made it relevant to our conference/business and to the theme of the conference. We couldn't have had a better speaker for this event!

Rob spoke really well about his success and his key drivers. He gave it a context that fitted the business environment as well as the sporting environment.

Rob was a very good speaker and tied in our performance management theme beautifully.

I’ve received a lot of positive feedback about your talk during the day and it was clear that our staff loved having you there in the evening. Without a doubt you added significant value to the whole event.

Four times Olympian Robert de Castella is the only Australian runner to have placed in the top 10 marathon finishers at three straight Olympics. He dominated the world marathon scene throughout the 80’s and was voted the world’s best marathon runner for that decade.

Although he never won an Olympic medal, he finished in the top ten on three of his four attempts. ‘Deeks’ has earned a revered place in the history of Australian sport, running fifth at the LA Games, winning the world Championship in 1983, setting a world’s best time and winning two Commonwealth Games gold medals in 1982 and 1986.

An Australian cross-country champion at 22, Rob took up marathon running in 1979 and made his Olympic debut one year later at Moscow at age 23, finishing tenth, behind the reigning champion. Two years later, he claimed his first victory and the world record, at the Fukuoka Marathon in Japan.

In 1982, Rob won gold at the Commonwealth Games in Brisbane and the following January he was voted Australian of the Year and honoured with an MBE. He went on to win two Rotterdam Marathons and the World Athletics Championships in Helsinki and several other major city marathon and races.

Rob went into the 1984 LA Olympics as clear favourite, but managed only fifth place in the tough conditions. Two years later, he retained his Commonwealth Games title in Edinburgh and won the Boston Marathon in record time. In 1988 he travel to Seoul for the Olympics and placed eighth. Four years later at Barcelona, he ran 26th. Rob retired from the sport after the 1993 London Marathon.

As Director of the Australian Institute of Sport (AIS) for five years in the early 1990s, Robert repositioned the AIS as a centre of excellence after the drugs in sport debacle of the late 80's. He was also involved in establishing the elite sports system being used today by our Olympic athletes and teams.

In 1995 Robert established his own company, SmartStart for Kids! SmartStart works through schools to encourage children to be healthy and active. It especially targets escalating obesity, poor nutrition and inactivity and has resulted in large improvements in child fitness and health. The Smartstart longitudinal database of children's health and fitness statistics has enabled valuable reports to be generated and a range of follow up services for students, parents, schools and government.

In 2004 SmartStart launched its adults and corporate health service, SmartStartfor Life!. SmartStart has worked in the corporate sector and mining industry to profile and report on organisational and individual health and fitness and implement programs to address and monitor identified physical health fitness and medical issues.

In January 2003, having lost his family home and belongings in the infamous Canberra bushfires, Robert became heavily involved in the Government's recovery programs, working with Sandy Hollway and the ACT Task Force to plan and implement the process of healing and rebuilding. He worked with the ACT Government to design and build a purpose built 2.5 kilometre grass cross country running circuit on the slopes of Mount Stromlo now named, the de Castella Cross Country Circuit. Robert was acknowledged as a "pillar of strength" for his family and the community.

In 2005, Rob launched a new gourmet bakery and café, Deeks, a health-focused bakery that specialises in quality grain and gluten free breads, cakes, pasta, pies and deserts. He now has two bakeries, and a rapidly growing wholesale business.

In 2010 he established another charity, the Indigenous Marathon Project Foundation that uses running, and especially the New York City Marathon, to showcase and celebrate incredible Indigenous achievement, and inspire and change the lives and futures of Indigenous Australians.

He is a Board member of the Sport Australia Hall of Fame chairing their Selection Committee, and is an occasional sports commentator.

Being the best you can be

Children's and corporate health and wellness

Importance of fitness and health