Print
Rodney Hogg, former Australian cricketing great, has become an established corporate and motivational speaker. His stories and real-life experiences are told with great aplomb and enthusiasm. Even if you are not a cricket or general sporting... 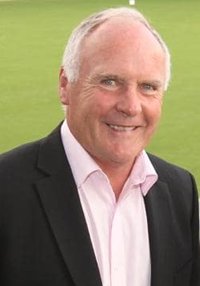 Extremely funny and engaging. Spoke from the heart and was very much a huge thumbs up from the customers. Even the younger guys that had never heard or knew of Rodney Hogg were glowing in their praise of him. A very funny guy.

Rodney’s ability to tell interesting and colourful stories of his cricket career and road to success was exceptional. Rodney was both informative and evocative.  He has the ability to entertain at all levels and presented an aura of self-made success that would be valuable in a corporate environment.  I highly recommend Rodney’s unique and inspiring presentations.

Why do you go to functions to listen to a speaker? Some may go because they want to be motivated; others may want to learn a new skill or approach to a problem; still others may be interested in the profile of the speaker. But those who came to hear Rodney Hogg were truly caught by surprise. They had no idea that they were going to be engaged in ‘side-splitting laughter’ for a full hour, as Rodney entertained everyone with his crazy ‘story on story on story’. You did not have to know anything about cricket to enjoy this WOW of a performance. The bottom line was – that he had no plan in his career – just a driving passion, and that is all he needed to get him to the top (well … .perhaps some skill too!).

Rodney Hogg travels from VIC
Fee Range: Up to $5000

Rodney Hogg, former Australian cricketing great, has become an established corporate and motivational speaker. His stories and real-life experiences are told with great aplomb and enthusiasm. Even if you are not a cricket or general sporting fan you will appreciate this gentleman's anecdotes and tremendous sense of humour and humility.

Blond, blue-eyed, aggressive and menacingly fast, Rodney Hogg announced himself with 41 wickets for World Series-depleted Australia against England in 1978-79. The way he regularly beat Geoff Boycott for pace thrilled Australia at a lean time.

Injury and a rebel tour to South Africa interrupted, cricket life was never quite so bounteous again. Nevertheless, Hogg was generally in Australia's first rank. A quirky character, he once had his wife erase the videotape of a soft dismissal while batting in a Test, saying he did not want his son to see him as a coward!

Rodney Hogg has become established as one of Australia's foremost corporate and motivational speakers. His experiences on and off the pitch are the highlight of many business and sporting functions.

I'm constantly embarrassed for people who mistake me for some other sporting hack. We are talking about a bloke who took 41 wickets at 12.85 in the 1978-79 Ashes series, not some pie-thrower who played a couple of Tests. Rodney Hogg is a great story teller and motivational speaker. The former Australian Cricketer; now sporting commentator and writer would make a perfect addition to any corporate function, business event or sport's day.

Rodney Hogg was born in Richmond in 1951 and would go on to a controversial career that started at Northcote Cricket Club and ascended to Victorian, South Australian and Australian representation. Rodney Hogg debuted with Northcote as a 16 year-old in 1967/68, but a back injury in 1970 saw quicks such as Froggy Thomson, Max Walker and Alan Hurst go past him into the Victorian side. When he saw his former Northcote teammate Gary Cosier move to Adelaide and break into the Test side, Hogg transferred to Prospect in 1975 and was soon in the South Australian team.

Hogg was a member of Northcote’s premiership team in 1973/74, taking 4/69 against a strong Melbourne line-up including Paul Sheahan, David Broad, Jeff Moss and Bob Lloyd. Hogg received his call up for the 1978/79 Ashes series, bowling with great pace and finishing the series with an amazing 41 wickets @ 12.85 including 6/74 on debut in Brisbane and ten wickets in a match twice – a record that must be near impossible to beat these days.

Hoggie became a national favourite and the crowd, in his adopted South Australia, could always be heard chanting, “Hoggie, Hoggie, Hoggie!” when he was charging in.

Hogg returned to Victoria in 1984/85 and was appointed Test vice-captain following Kim Hughes’ resignation during the summer, but his decision to sign for the rebel South African tours in 1985/86 and 1986/87 effectively ended his Test career. Hogg continued playing VCA cricket until 1991, finishing with 282 wickets @ 18.08 from 136 matches for Northcote, Carlton and Waverley/Dandenong. He took 5 or more wickets in an innings 13 times.

More recently, Rodney has been commentating for C7 in Australia for a couple of years, and was Strategy and Fast Bowling Coach for Victorian Cricket. On top of this, Rodney has built up a great reputation as a corporate speaker.

The next time your business group, training session or club event requires the opportunity to rally the troops and engage clients in a special event, think of Rodney Hogg and experience the magic that still is "Hoggie"!