Print
Roger  Rasheed is a current international coach and has spent the past 14 years as coach of the game’s elite. His passion for daily excellence has allowed Roger to create the most powerful coaching brand which is delivered to his players. “I COACH TO MAKE MY PLAYERS BECOME PERSONAL CHAMPIONS BOTH ON AND OFF THE COURT.” 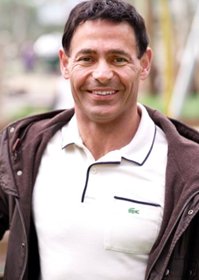 “I really enjoyed every minute I spent with Roger. I love his company. He’s a great guy to have around and he’s really been a pleasure to work with. He’s worked harder than any other coach that I’ve ever trained with. I think quite often we both have the same ideas going through our minds when we’re out there. We speak a lot off the court about what I’m feeling on the court and it’s really paid off well.”

“For me Roger changed the way I approached the game of tennis. Roger showed me what

I needed to do off the court as well as on the court. Whenever I stepped out for a match I felt I was physically and mentally prepared and with Roger I achieved my highest career ranking and was able to beat some of the best players in the world. Thank you Roger.”

Roger Rasheed is a current international coach and has spent the past 14 years as coach of the game’s elite. His passion for daily excellence has allowed Roger to create the most powerful coaching brand which is delivered to his players. “I COACH TO MAKE MY PLAYERS BECOME PERSONAL CHAMPIONS BOTH ON AND OFF THE COURT.”

At 16 Roger qualified for the Australian Open as the youngest person in history, a feat only to be eclipsed by a player he would go on and coach, Lleyton Hewitt. Roger then moved

into the Australian Institute of Sport. Roger spent the next six to seven years dealing with a crippling back / spinal injury which threw his career into one of extreme adversity. The challenges were daily. In 1992 the time came to take the strong medical advice given, he retired to save any future, permanent, crippling injuries that would effect his daily life.

Roger started on the ATP Tour in 2002 with Australia’s great Lleyton Hewitt. They worked together until 2007. From 2008 to 2011 Rasheed coached French acrobat Gael Monfils to a career high no. 7. Roger then went on to coach another French star in Jo-Wilfred Tsonga with success followed by the young talent of Bulgarian Grigor Dimitrov which he transformed into a top 8 player, winning 4 titles in the first 12 months and giving Dimitrov a taste of Grand Slam success for the first time with a quarter final appearance in Australia and a Wimbledon semi finals appearance in 2014.

Roger’s infectious nature, passion, drive and tennis IQ are why he is one of the most sought after and respected coaches in the world today.

Roger moves from the tennis court and straight into the corporate speaking environment with natural ease, he has an infectious delivery and understands how to deliver a clear strong message that aligns itself to the corporate world. Roger is a presenter who delivers key note speaking that can transform the corporate audience instantly, his natural understanding of how sport and business can move hand in hand is the reason he is sought after as a speaker.

Once you have listened to Roger you will want to seek more time with him, to understand more about what makes his high performance mind work the way it does, he is a leader who

wants to create greatness within others. You can engage Roger for any length of time, for a short motivational presentation right through to a full days conference activation-nothing is out of his reach when it comes to speaking about his passion and yours.

Roger has a passion for success, developing successfully minded people that allows a lifetime of opportunity. The Elite Team profiling is highly successful through the corporate sector, from CEO’s, management teams, executives, government & businesses at large. You must be legitimately looking at building a Champion internal team that enhances the inward company brand and culture, if you do this then you can be assured of becoming a long term power brand in the open market that is always prepared for the moving challenges that confront them.

Roger is a highly respected international tennis coach as well as a physical strength/conditioner coach who believes in treating your tennis environment at the elite level as an A LIST business, leaving nothing behind while you work on achieving your own personal greatness. Roger frequently works as an expert commentator at the Grand Slams for the Ch 7 network in Australia and frequently appears on the Tennis Channel in the USA. His media presence continues all year round via multi radio networks in Australia and around the globe. Rasheed is the founder of the Roger Rasheed Sports Foundation - saving kids lives through the medicine of sport. Roger resides in Adelaide, South Australia, Australia and is a father to his daughter India Rasheed.