Penguin Bloom – The remarkable story of how a little feathered friend slowly brought life and laughter back into the house where sadness and sorrow had reigned.  Sam’s presentation draws upon a range of themes including resilience, goal setting, facing adversity, family, healing, mental wellness and more. 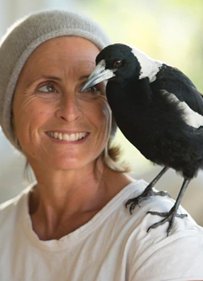 We are incredibly grateful that Sam was able to so eloquently share her story with us yesterday, you are both an inspiration, brave and amazing people! Thank you for your contribution to making our event such a success, our audience left feeling positive and enriched from the experience. You made us think, laugh , cry and really put things into perspective!

Sam takes life and the challenges it has provided well and truly 'head on'. This resonates through her presentations and delivery, creating a powerful experience for her audience. If you're seeking a remarkable and inspiring personal story delivered with passion and humility, Sam is an outstanding choice.

Sam impacted our audiences with such humour and realness that we were all moved to tears. Her storytelling brought us all to our feet for a standing ovation, and I’ll forever carry her message with me.

The blink of an eye, a heartbeat, a split second in time… That’s all it took for Sam Bloom’s life to change forever.

Sam had everything she had always dreamed of. She’d travelled extensively, fulfilled her childhood dream of becoming a nurse and was a happily married mother of three young boys. She spent her time raising her family on Sydney’s Northern Beaches, and ran, swam, biked and surfed every chance she had. Life was bliss.

Without warning, the dream turned into a nightmare. On a 2013 family holiday in Thailand, Sam leant against a rotten balcony railing falling through it and crashing 6 metres onto the concrete below.

She was lucky to be alive and had suffered devastating injuries, including severe damage to her spinal cord that left her completely paralysed from the chest down.

Broken and hopeless, Sam reached her outer limits of physical and mental suffering. But with courage, determination and a little help from an unlikely feathered friend, she made her way back from the edge, scarred but undefeated.

Once her condition was stable enough, Sam returned from Thailand to Australia and braved her way through seven long months of intensive rehabilitation. She craved a return to normal life, and was finally able to come home to the love of her family, only to fall into a deep and consuming depression.

A frail, injured little magpie chick became Sam’s unexpected saviour. Found by her son Noah on a blustery Spring day, Penguin, as the boys named her, became Sam’s constant companion. Penguin and Sam became inseparable and over time Penguin slowly brought life and laughter back into the house where sadness and sorrow had reigned.

From this, Sam found a renewed sense of purpose and strength in taking up competitive paracanoeing, eventually placing 13th in the world and winning two Australian titles before representing her country at the 2015 World Championships in Italy.

Sam always felt that Penguin had a remarkable sense of timing and around the same time that Sam left for Italy, Penguin returned to the wild for good.

Today, Sam has reconnected with her love for the ocean and made a return to surfing. In August 2018, Sam was selected as a member of the Australian Adaptive Surf Team and has since won Gold for Australia at both the 2019 and 2020 World Para Surfing Championships.

Sam is a refreshingly honest and deeply engaging speaker who takes us on an intimate, visual journey against the backdrop of her husband Cam’s stunning still photography and video.

Sam tells of the extraordinary highs and painful lows of life before, during and after the accident that changed her life forever, leading us through the journey back from the edge of a deep depression that almost claimed her life.

Not prone to sugar-coating, she pulls no punches about the situation she finds herself in and delivers her message with clarity and purpose to remind her audience that we have to live in the present as we never know what tomorrow will bring.

Sam has a wealth of knowledge and experience to draw upon and is able to deliver poignant and tailored keynote sessions on a range of themes including resilience, goal setting, facing adversity, family, healing, mental wellness and more.

Your audience will be left deeply touched and truly empowered by Sam’s story.

Sam and her family’s remarkable story has now been turned into a major motion picture with an award-winning production team of Naomi Watts, Bruna Papandrea, and Emma Cooper, with Watts set to star as Sam. The star cast also includes Andrew Lincoln, Jacki Weaver and Rachel House. Sam will play her own role as an Executive Producer on the film.

The movie was filmed in the Bloom house and on the Northern Beaches of Sydney in Aug 2019, with a World premiere at the prestigious Toronto Film Festival (TIFF) in Sept 2020. An Australian release distributed by Roadshow is set for 1st Jan 2021.

A second book Sam Bloom: Heartache & Birdsong published by ABC Books on 2nd Sept 2020 picks up the story where Penguin Bloom ended, sharing Sam’s own story for the first time.

Penguin Bloom – The remarkable story of how a little feathered friend slowly brought life and laughter back into the house where sadness and sorrow had reigned.