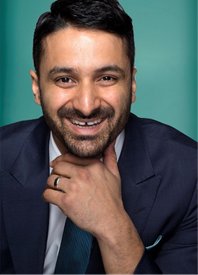 
“Sam has a way of speaking that not only inspires but makes you feel like you’ve known him for years after the first smile. His message is one that is at once simple enough to be grasped by everyone who has ever struggled with a problem in their lives, yet profound enough that they could dedicate their lives to following it.”
Google

“Inspiring and entertaining the room was transfixed by Sam’s message of optimism in both business and in life.”
CEO – Citibank

“Sam has a unique ability to be entertaining, professional and informative – all in the same presentation. Being part of the audience at one of his recent presentations, I observed a dynamic, motivating and effective speaker who was able to capture the audience within the first minute of his presentation. Sam connected with the audience at an emotional level and made a lasting impression!”
Fairfax Media

“Sam was absolutely incredible. Inspirational. Motivational. And every other positive description in the English language!!!”
ING Direct

“Sam displays a unique skill with the ability to draw on his experience and convey an inspirational and powerful message that will leave a lasting impression in the minds of those fortunate enough to listen.”
Jeremy Rockliff MP Deputy Leader of the Opposition Parliament of Tasmania of Australia

“Authenticity, warmth and infectious passion leak in volumes from Sam. His love for people, family and life inspire, challenge and excite me. Sam’s quest to learn and develop himself and others is to be highly commended. Once you meet Sam you’ll want to be his friend for life…”
George Harris Business & Facility Manager Uniting Churches
Sam Cawthorn travels from NSW
Fee Range: $5001 to $10000

Sam Cawthorn is one of the biggest personalities in professional speaking in Australia. He has authored 7 books including x2 international bestsellers, is a former Young Australian of the Year and also Edupreneur of the Year. He is the current CEO and founder of Speakers Institute.

Pronounced dead for over three minutes following a horrific car crash, Sam Cawthorn survived despite all the odds stacked against him. The accident resulted in his right arm being amputated, and caused permanent damage to his right leg. He was told he would never walk again; a setback that would surely defeat many.

Proving the doctors and critics wrong, through sheer determination Sam regained his ability to walk just over a year later.

Since his accident, Sam has gone on to speak in 36 countries, sharing his message of resilience with millions of people which has seen him share the stage with world leaders including President Bill Clinton, Michael Jordan, Richard Branson and the Dalai Lama, through his keynote speaking.

An international best-selling author, Sam was named Young Australian of the Year, Edupreneur of the Year (2015) and became the CEO and Founder of Speakers Institute and Speakers Tribe, mentoring a community of speakers and leaders who are learning to share powerful stories to emotionally connect and influence others.

Sam has authored many books including an International New York Times Best Seller. It was the notion that ‘story is the future’ that led Sam to write his seventh and latest book Storyshowing . Published by Wiley only released in October 2017, Storyshowing delves deep into the influence of stories; and that the winners of the future will be those that show the most powerful one that evokes the most amount of emotion in the shortest amount of time.

A regular media commentator, researcher and thought leader, Sam Cawthorn is one of the biggest personalities in professional speaking in Australia. His presentations and keynotes need to be experienced.

Sam resides in Sydney Australia with his wife Kate and his 3 children.

Storyshowing - How to stand out from the storytellers

Everything we see now is telling us a story. The stories of products and services, brands and organisations; everything now is about the emotion. The next three years will shape the way we communicate for the next 30 years. The more we stop telling and start showing, at every touchpoint, will evoke emotional connection and this will be the defining moment in our value proposition.

In this session you’ll discover:

Bounce Forward - How to transform crisis into success

We’ve all heard about and even spoken about how we all must bounce back following crisis, downturns or tough times. However have you considered that bouncing back implies that we are not learning and going back to where it all started. This interactive presentation discovers how Bounce Forward is the only and surest way in embracing the future by learning from crisis and failures and moving towards innovation and forward thinking.

In this session you’ll discover:

Every leader and manager must learn how to master communication to influence and persuade the right people. There are sub-modalities to influence and persuasion that only the masters have tapped into, untill now. This is a very practical and hands-on experience; and Sam will show that trust and congruency must be at the centre to everything as we watch every every single thing when others communicate with us to determine if we buy in or not.

In this session you’ll learn: