An honest and engaging story that has captured the hearts of many.  Saroo Brierley was separated from his mother only to be reunited with her 25 years later.  Author of ‘A Long Way Home’, Saroo’s incredible story is one of human spirit and passion. 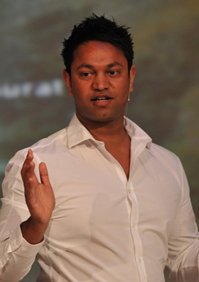 “The story of Saroo B-rierley's reunion with his Indian family - 25 years after being separated and adopted - has touched the hearts of millions around the world. “


“With memories of Slumdog Millionaire still fresh, publishers and film producers are getting interested in Saroo’s incredible story.”


“It all began with a train ride into the unknown. The journey took him places and 25 years later, has finally come to an end. In a story that has enough fodder for a blockbuster movie.”
India Today

Saroo Brierley was an excellent speaker and his inspirational story was very well received by our clients. They particularly enjoyed the Q&A component of Saroo's address - his openness, honesty and heart-felt non-scripted answers. Saroo was a pleasure to work with, he communicated clearly with us and he was very happy to accommodate our ideas. We would definitely recommend him as a keynote speaker!

Saroo was a very genuinely sincere speaker, he had the audience captured from the first moment.

Saroo is very engaging. He totally holds his audience. He is very generous with his time and everyone warmed to him.

An honest and engaging story that has captured the hearts of many.  Saroo Brierley was separated from his mother only to be reunited with her 25 years later.  Author of ‘A Long Way Home’, Saroo’s incredible story is one of human spirit and passion.

Saroo Brierley was born in an Indian town called Khandwa. In 1986, aged only 5, he lost all contact with his family when he was at a train station waiting for his brother who never returned.

After living on the streets of Calcutta for 3 weeks by himself, he then got placed into a local orphanage where an Australian family adopted Saroo.

Saroo then grew up with his newly adopted parents in Hobart, Tasmania where he spent the next 25 years.

After years of trying to track down his old town through the labyrinth of railway lines on Google Earth and an image etched into his brain as a 5 year old, he finally found his town Khandwa on the map and travelled to India to try and find members of his family.

In early 2012, after 25 years of separation, he reunited with his Mother. This is a story of courage, inspiration and most importantly to never let go of what drives the human spirit – hope.

Saroo’s story has captured worldwide attention, having been published in various media outlets such as CNN, BBC, AP, Vanity Fair, Hollywood Reporter, 60 Minutes, the Today Show and a plethora of radio networks. He has signed a book deal to distribute his story globally with Penguin Publishing and we have partnered with Academy Award winning production company See-Saw Films to bring Saroo's story to the big screen. See-Saw producers Emile Sherman and Iain Canning won an Oscar for
The Kings Speech (2010). The International Distribution rights for the film have recently been sold to The Weinstein Company (TWC) at the 2014 Cannes Film Festival for $12M USD. The Aus & NZ rdistribution rights are owned by Transmission Films.

Saroo has also had a segment on 60 Minutes Australia about his story which pulled in over 1.7 Million viewers. His book titled "A Long Way Home" was released nationally in June 2013, it is now an Australian Best Seller and it has been sold into 10 foreign territories.

A Long Way Home is a moving and inspirational true story of survival and triumph against incredible odds. It celebrates the importance of never letting go of what drives the human spirit – hope.