Shane Watson is a former Australian professional cricketer.  His retirement marked the end of an era in Australian cricket, as he is the last surviving player of Australia's golden era. Sharing his life experiences Shane is both a strength and encouragement for future generations. 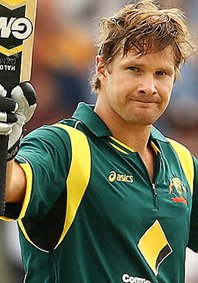 As a respected and dedicated professional sportsman, Shane is able to influence the Australian public and continually exude a persona of trust, confidence and loyalty.

In 2010 and 2011 Shane was awarded the illustrious Allan Border Medal as Australia’s best player after remodelling his bowling action to become a destructive and reliable competitor with both bat and ball in all forms of the game. Shane became the second ever player to win back-to-back medals.

Shane reinforced his status as one of the world’s most talented T20 players with being awarded Player of the Tournament in the ICC T20 World Cup in Sri Lanka in October 2012 after securing four consecutive Man of the Match awards.

Shane’s record in the shorter forms of the game is breathtaking. The explosive batsman hit a record 15 sixes against Bangladesh in April 2011 to score 185 runs.

Shane played an integral part in Australia’s 5-0 Ashes Series whitewash against England in Australia during the 2013/2014 International Summer of Cricket.

Captain of the Rajasthan Royals, Shane was also named the most valuable player in the Indian Premier League for the Rajasthan Royals in the inaugural 2008 season and again in 2013. Most recently Shane performed as a stand out all-rounder in the Australian team to take home the Cricket World Cup in 2015.

Shane has overcome adversity in his career and as a brand ambassador or spokesman he brings a multitude of determination, strength and personality to the role.