Print
Simon Katich was one of Australia’s top current international cricketers, known for his ability and tenaciousness as an opening batsman. A polished speaker and occasional media personality, Simon Katich illustrates the parallels between business and sport at the highest level, accompanied by many personal experiences and anecdotes. 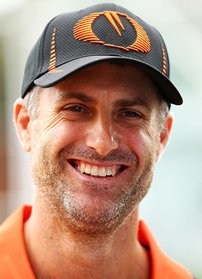 “We were impressed and delighted at Simon's warmth, professionalism and humour as a speaker at our special breakfast recently. Simon has an impressive (and sometimes hilarious) collection of stories about the cricketing world, and our guests felt that they had been treated to an inside view of the Australian test team. Simon was unfailingly generous with his time and his attention - something that won him a good many new fans amongst our audience.”

“The event feedback described as inspirational, informative, honest and outstanding. Both the verbal and written feedback was very positive and the guests found you easy to listen to and very engaging.”

Simon Katich travels from NSW
Fee Range: Up to $5000

Simon Katich began his legendary career when he made the Western Australian state team and played his first matches in the 1996-1997 seasons. He made an instant impact on the team.

The following season, Simon tallied 1039 first-class runs and played an integral part in the team’s 1997-1998 Sheffield Shield triumph. Simon’s accomplishments and skill continued over the next seven seasons. In 2004, he won the State Player of the Year award.

Perhaps Simon’s greatest season was the 2007-2008 campaign. That year he captained the Western Australian side and led the team to its 45th Pura Cup. Simon also achieved the amazing feat of breaking Michael Bevan’s Pura Cup/Sheffield Shield single-season runs record. Simon also scored an amazing 306 runs for New South Wales in a game against Queensland. His excellence on the pitch and his steady leadership won him the Pura Cup Player of the year for the 2007-2008 season.

Simon’s test debut came in 2001 when he joined the Australian side for the 2001 Ashes tour of England. He secured a career-best 6 wickets in test match against Zimbabwe in the 2003-2004. He also made his One Day International debut against Zimbabwe in 2001.

His place on the team was solidified when legendary cricketer Steve Waugh left the team in 2004. That year, Simon’s talent peaked and he put in a fantastic performance against India in front of a home crowd in Sydney when he made a century.

He went on to set a career high for runs when he made 157 runs against the West Indies in 2008 in Bridgetown, Barbados. Simon totalled 10 centuries during his international career, including four during the 2008 season.

Simon’s last test came in December 2010 against England. Simon retired from the Australian national team in 2012. Over the course of his national team career, Simon earned 45 One Day International caps and 56 national team test caps. He finished his test career with a 45.03 batting average.

Since his departure from international cricket in 2012 Katich has played for Indian Premier League team Kings XI Punjab and the Perth Scorchers and as of October 2015 was appointed the assistant coach for Kolkata Knight Riders.

A polished speaker and occasional media personality, Simon Katich illustrates the parallels between business and sport at the highest level, accompanied by many personal experiences and anecdotes.