Print
Bob Geldof is an influential and inspiring speaker. He is highly entertaining and has great insight into the socio-political and upliftment arenas as well as leadership, communications, marketing in the global village, motivation and self-development. 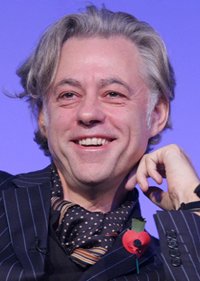 Everyone I spoke to (and I've spoken to a lot of people) found your speech inspiring, thought-provoking and challenging . . . one of the best keynotes we have ever had.

Many thanks for the really engaging, down-to-earth and inspirational talk. Looking around the room, I could see the audience was totally absorbed in what you had to say. Even if only a few of us take up Sir Bob's advice he will have done our profession a great service

Geldof truly inspired and challenged the audience - young, high potentials from all over the world - in a way they will not forget easily. His delivery provoked not only the audience, but also ING leadership to reconsider its commitment to society

We ask our delegates to complete evaluation forms on the speakers etc. Bob received the best marks in the history of our event (higher than Bill Clinton!). The top mark is 5 but people were crossing that out and putting a 6 or even a 10! Great message, great delivery, fully deserved his standing ovation! Thanks to you for making sure it worked and to Bob for taking time out from G8. Awesome!

Sir Bob Geldof is prolific and successful, a tireless charity campaigner who uses his worldwide fame to great effect when it comes to raising awareness of a wide range of issues and causes, including African famines and aid organisations, as well as politics, global communications and business.

During his music career, which started in 1975 with The Boomtown Rats, he has written and recorded a number of albums and hit singles, both as part of a band and as a solo artist, and this continues to be one of his passions. In 1984, he turned his attention to the famine that plagued Ethiopia, resulting in the formation of Band Aid and the massive charity fundraising event, Live Aid. He was knighted for his charity work in 1986.

Sir Bob established himself as an astute businessman with the co-ownership of television production company Planet 24, which was responsible for launching The Big Breakfast in 1992. In the late 90s, he founded online travel agent Deckchair.com, which was sold in June 2003. Having sold Planet 24, Sir Bob and Alex Connock founded Ten Alps Communications in 1999, which produced documentaries for the BBC, Channel 4 and Sky, among others. As part of his TV and charity work, he completed a TV series for BBC – Geldof In Africa – in which he travelled through West Africa, Central Africa and East Africa. He has also written a number of articles for eminent publications such as Time magazine.

In July 2005, Sir Bob was at the forefront of the Live 8 concerts which, as with Live Aid 20 years previously, were intended as a global fundraising event. He continues to be a tireless charity campaigner, and has received a number of awards in recognition of his work, including the Nobel Man of Peace Award, several Honorary Doctorates and several nominations for the Nobel Peace Prize.

Bob is the recipient of the 2007 M100 Sanssouci Media Award. The prize giving ceremony took place at the Schloss Theatre in the Neue Palais in Potsdam, Germany.


In February 2008 Bob traveled with President George W. Bush to Africa on the President's farewell tour of the troubled continent and wrote a major feature article for TIME Magazine. Cameron Diaz joined Bob and Dave Stewart to record a song that the musical duo wrote for Pangea Day (10th May 2008) when Bob spoke at the TED Conference in Monterey, USA in March 2008. In 2009 Sir Bob was awarded the Der Steiger Award for his long standing contribution to the music industry at a prestigious award ceremony in Bochum, Germany.

Since 2010 Bob has been working on a private equity investment fund for Africa ("The 8 Mile Fund") and which he refers to as ‘the third and final leg of the tripod of African support'. The first was in 2004 we needed Charity to immediately raise the funds needed to assist in overcoming the Ethiopian famine and save the lives of 30,000,000 people (Band Aid and Live Aid). The second was in 2005 when we needed Justice to get the world to write off the debts that they had imposed on the continent, increase aid, and restructure the one-sided trade agreements. The last is Investment - the need to bring funding to develop infrastructure, communications, manufacture and agriculture to bring Africa en par with other growing economies such as India and China and launch it into the 21st century. In 2012 the fund reached its first close at USD 200,000,000 and is now well on its way to a second close at USD 500,000,000.

Bob remains a passionate musician and between his business, political activism and humanitarian activities he still composes, plays and tours with his band. In 2013 he will be touring Australia, South Africa, South America and Europe and possibly see the launch of another new album.

Bob Geldof is an influential and inspiring speaker. He is highly entertaining and has great insight into the socio-political and upliftment arenas as well as leadership, communications, marketing in the global village, motivation and self-development. His unique presentations, views and insights are highly sought after by companies who wish to benefit from his sensational presentations and which always leave a lasting and powerful impression.

An influential and inspiring speaker, he uses his experiences and insight to talk in an informative and entertaining way on a range of topics. He is highly provocative, uplifting, inspiring and motivating, using his own experiences as a basis for his talks.

Dublin to Darfur - A Passion for Progress