Print
Former Mayor of Christchurch City NZ, Sir Bob Parker was acknowledged for his outstanding leadership role during the  2010 - 2011 earthquakes in NZ. Sir Bob Parker is an engaging speaker sharing his knowledge and experiences through his presentations. 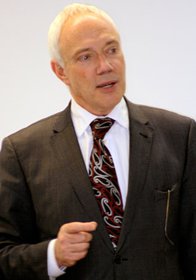 Bob was an entertaining and engaging speaker. He connected with the audience instantly and maintained a comfortable level of engagement throughout his presentation. His story about his experiences in the two Christchurch earthquakes, while incredibly sad for the city, provided inspiration for our audience on the work needed now to ensure capacity within workplaces and communities to best deal with difficult situations.

Sir Bob Parker served four terms as Mayor of Christchurch City, including during the 2010-2011 earthquakes, one of New Zealand's deadliest and most catastrophic natural disasters. He won wide praise for his role, leadership and work in response to the quake that claimed 185 lives, and collapsed or undermined tens of thousands of buildings throughout the city and beyond.

Recently knighted for his services to the disaster recovery, Sir Bob Parker was also the recipient of the New Zealander of the Year 'Local Hero' Award, and nominated as one of 10 finalists in New Zealander of the Year. He led and developed post-earthquake design consultation 'share an idea', which was awarded the global Co-Creation Award, the first time this award had been granted outside of Europe. He was also Chair of a major and now implemented multi-partner strategy for five Councils known as Greater Christchurch Urban Development Strategy, and has worked with the United Nations and the United States Armed Forces as well as local and central governments on earthquake and sustainability issues conferences in Nepal, Korea, Philippines, the UK and Australia.

Prime Minister John Key in a speech to the New Zealand Local Government stated that Sir Bob Parker's 'commitment to the city during its darkest hours will be his legacy'. An editorial in The Press noted that 'his calm leadership throughout the emergency periods were noted for providing reassurance and hope to the people of Christchurch' while a February 2014 article in The Age spoke of his instant fame 'around the world for the frank assessments he made to the assembled media about the emotion-charged rescue efforts.'

In addition to his 22 years in local government, Sir Bob Parker's career spans 20 years in broadcasting, including owning local versions of international formats, producing, writing and presenting a variety of programs.

Recently appointed a Senior Follow at the University of Canterbury, he is now committed to a series of governance roles in both the private and charity sector, including as Chairman of the Board for a joint China-New Zealand property development company, and in high demand as a speaker on vision, strategy and leadership.

Sir Bob Parker lead the only non-Central Government driven local body merger in the history of New Zealand. Against a background of personal attacks and misinformation he found a simple pathway to build a coalition of partnership among the bureaucrats and politicians that would enable a small community to secure its future. Holdings meetings from the Prime Minister in Parliament to sceptical locals in small community halls across one of New Zealand's most beautiful areas he built a simple campaign with a powerful message; 'Lets build a sustainable future for the community we cherish'. Is there a point at which the price of perceived political independence comes at the price of the things we most cherish?

Sir Bob was Knighted by the Crown for his work in leading his community through the 2010 - 2012 Christchurch earthquakes. As an editorial widely published in New Zealand at the time said:

The public tribute paid by the Prime Minister, John Key, to the outgoing mayor of Christchurch, Bob Parker, at a local government conference this week was an entirely appropriate acknowledgement of the immense role the mayor played in rallying the city in the aftermath of the February earthquake. Now that Christchurch is on the way to a robust reconstruction and recovery it is easy to forget the deep uncertainty that lay over it as people surveyed the devastation that had been wrought by the quakes. The gloomiest forecasts may not have been much spoken aloud, but fears that the city's economy would plummet and that there would be an exodus of residents were widespread. It did not happen and the fact that it did not owed more than a little to Parker's leadership at the time. The power of a single figure able to become a calming and authoritative presence in the midst of disaster cannot be overestimated and Parker for several weeks, in deeply trying times, became that figure for Christchurch. As the Prime Minister said this week: 'His commitment to the city during its darkest hours will be his legacy.'

What were the leadership principles that guided Sir Bob at this time? And how did he apply them. What were the lessons learned? This is the story of how he created both a vision for the future for his city, and confidence in its people in a time of great uncertainty.

The Christchurch Disaster Story – The Power Within

An earthquake that destroys a city lasts but for a few seconds. Ordinary suburban life is transformed in moments to a fight against fear, and a battle for survival. So how did a community of 500,000 people cope with the shocking tragedy that took 185 lives, injured more than 10,000 people, and converted their world into a shattered and dangerous place, with thousands of aftershocks continuing to shatter their homes, neighbourhoods and livelihoods. The people of Christchurch were praised for their resilience and courage. The community rose to the occasion, acts of bravery and generosity became the new normal. In a broken city a new sense of community arose. People rediscovered the real values of life and community. They found within them more strength, compassion and ingenuity than they ever believed possible. This is the story of how a city rose from the rubble.

In the wake of the three-year anniversary of the disaster, Parker shared 10 tips about preparing for, and managing, a large-scale crisis.

2. Prepare for the worst-case scenario.

3. As disaster unfolds, focus on the basics.

4. Use every avenue to communicate.

6. Solve one problem at a time.

7. Stay in touch with your community.

10. Remove the roadblocks to recovery.