Print
A compelling and fascinating speaker, Sir Gordon Tietjens is arguably New Zealand's most successful sporting coach of the past 25 years. Having represented NZ Rubgy Sevens from 1983 and coached from 1994, Gordon shares his philosophies to motivate and bring out people's best. 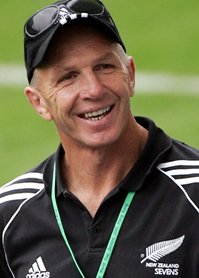 His talk was outstanding. He showed real passion for his rugby and country. He had strong messages on how to succeed.

Gordon captivated the audience from the get-go and held them for almost an hour. He took time afterwards to talk with individuals. Very sincere. Made a great end to the day.

Gordon picked our audience brilliantly. His stories were entirely relevant to our team. The feedback from our operations team in particular was fantastic, and this was the primary audience. This is a great achievement as we have struggled to achieve this objective in the past. His stories were inspiring and personally challenging, and his delivery style made everyone feel engaged.
Tip Top

I wanted to thank you very much for the huge contribution that you made towards our dinner and conference being the success that it was. Our guests thoroughly enjoyed your stories, messages and fantastic sense of humour. Your attendance, presentation and timing really made Lloyd and I look good and with our fingers on the pulse of our customers. Thank you! Personally, I know that I'm a richer person for having met you. I respect your philosophies and the way you live your live and run your teams.

The team were very interested in Gordon's story – he related his professional sporting and corporate stories to align with the team of Finance people he was presenting to. He used humour to lighten the mood and really focused on the stories that highlights team work, motivation and cohesiveness. I was thoroughly impressed and pleased with the way Gordon engaged with the team before and after his speech he certainly left a great impression on the wider team – there was a buzz in the air and Gordon's contribution lead to the overall success of the dinner!

Gordon connected well with the group with an excellent mix of humour and content.
ASB Bank Ltd

Gordon Tietjens has led New Zealand’s dominating run in the world of rugby sevens. He is arguably New Zealand's most successful sporting coach of the past 25 years. He has set the standard in Sevens coaching since taking over as national coach in 1994. As at the end of 2014 he had coached the NZ Sevens team to 12 world titles from the 15 contested. In addition to 12 world titles his sides have won four Commonwealth Games gold medals under his stewardship.

In May 2015 New Zealand qualified for the 2016 Rio Olympics. New Zealand did not have success in Rio, and in September 2016, Titch announced his retirement from the coaching role.

His story is unique in the annals of New Zealand sporting achievement. He has an uncanny eye for spotting talent and every year he introduces new stars of the future to New Zealand rugby. Stars like Jonah Lomu, Christian Cullen and Joe Rokocoko. But as quickly as he launches them on to the world stage, they are snapped up by other coaches for Super 14 and All Blacks duty. Tietjens talks about the great success his teams have enjoyed as well as the frustrations he has faced at losing players for important tournaments. As well, he will talk about his legendary training methods and hard-nosed approach to winning.

Throughout the 1990s and 2000s. In 1999 his efforts were recognised by being awarded the NZ Order of Merit in the New Year’s Honours List. In 2007 Gordon was awarded a Companion of the New Zealand Order of Merit for services to rugby. In 2012 Gordon received a knighthood. Gordon was named the New Zealand Rugby Union Coach of the Year for 2010, recognised for guiding his team to a fourth consecutive Commonwealth Games gold medal.

In May 2012 Gordon became the 49th inductee into the International Rugby Board's Hall of Fame. The commemorative cap and gold pin were presented at an awards ceremony at Twickenham, shortly after New Zealand clinched their 10th World Series title from 13 attempts.

Gordon has been the New Zealand sevens coach since 1994, guiding the team through a string of wins in tournaments from South America to Dubai.In 2013 Gordon's team were once again World Champions this time in Russia.

In May 2006 Gordon released his book "Sevens Mastery". His second book "Titch-Sevens is my game" was a best seller.

Gordon will speak from the heart and share his philosophies that have helped him bring out the very best in so many people over a 20 year span, to motivate and drive you to aspire to the same levels of dedication and commitment that the people he has coached to the top of their game have consistently reached. Gordon is a compelling and fascinating speaker who will motivate and inspire you to achieve the most you can.