Print
Sir Richard Branson is the face, spirit, and entrepreneurial mastermind behind Virgin, one of the world's most dynamic brands. Credited as one of the world's greatest brand-building visionaries, Branson built Virgin Group, Ltd., to... 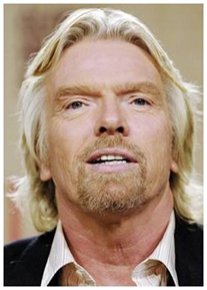 Sir Richard Branson is the face, spirit, and entrepreneurial mastermind behind Virgin, one of the world's most dynamic brands. Credited as one of the world's greatest brand-building visionaries, Branson built Virgin Group, Ltd., to include over 360 companies from Virgin Records (which he sold for $1 billion) to Virgin Mobile USA (the fastest growing company in history to reach $1 billion in revenue).


Crediting "fun" as his guiding life principle, Branson is also known for his fanatical record-breaking attempts, including being the first to fly a hot air balloon across the Atlantic. Proving that one can "have fun while making a fortune," he has become revered for his unconventional management style and uncanny ability to motivate his employees.

Branson has also made it part of his mission to support global causes. With the help of Nelson Mandela he started The Elders, a group of eminent global leaders who come together to "promote peace building, help address major issues of human suffering, and promote the shared interests of humanity." He is also the founder of the Carbon War Room, which works to increase the effectiveness of climate change efforts that are already underway.

Sir Richard Branson's first successful business venture was at age 15, when he published a magazine called Student. He then set up a record mail-order business in 1970. In 1971, he opened a chain of record stores, Virgin Records, later known known as Virgin Megastores and rebranded as zavvi in late 2007. With his flamboyant and competitive style, Branson's Virgin brand grew rapidly during the 1980s - as he set up Virgin Atlantic Airways and expanded the Virgin Records music label.

Today, his net worth is estimated at over £4 billion (US$7.8 billion) according to The Sunday Times Rich List 2006, or US$3.8 billion according to Forbes magazine. Sir Richard Branson is the most exciting and personable businessman alive. He has achieved what most young professionals could only dream of: incredible wealth, fame, and acknowledgment, all the while still managing to have a good time.

Sir Richard Branson's autobiography LOSING MY VIRGINITY has sold over two million copies worldwide. As one of the most recognised men in the world, Richard is admired for his approachability and can-do attitude.

SCREW IT, LETS DO IT reveals the lessons that have helped him through his business and personal life, like believing it can be done and that if others disagree with you, try and try again until you achieve your goal or you that you must love what you do.

These and other lessons, with examples of how Richard learned them and how he’s used them, are included in this stirring and candid look at his lessons from an exceptional life which will inspire you to make a difference in your own life.

Sir Richard Branson is a flamboyant British billionaire that has built his company (Virgin) into one of the world's biggest brands. He's brash and isn't afraid to take risks! There are few businessmen who have been as flamboyant -- or as successful. He is the founder of the Virgin Music label, Virgin Atlantic Airways, and Virgin Cola. He has unorthodox methods when it comes to doing business, but they work. And chances are that no one has had as much fun on the road to becoming a billionaire than Branson did. His insatiable desire to push the boundaries of common business practices has made him take on industry giants like British Airways and Coca-Cola.

For a businessman, when is a career considered accomplished? Making $100 million, $1 billion, or changing the world? Sir Richard Branson has done all those things. He is ranked among the 10 best businessmen of England, has a net worth of $7.8 billion, and is close friends with The Rolling Stones all while running a huge company. He is as cool as they come.

In Richard Branson's enlightening, entertaining keynotes, he candidly and humorously shares the real-life experiences and inspiring vision hat have brought him such unyielding success.

Screw Business as Usual
Business Stripped Bare: Adventures of a Global Entrepreneur
Screw It, Let’s Do It: 14 Lessons on Making It to the Top While Having Fun & Staying Green
Losing My Virginity: How I’ve Survived, Had Fun & Made a Fortune Doing Business My Way
Subscribe
© 2022 Platinum Speakers