Print
One of the all time cricket legends West Indian cricketer Sir Vivian Richards is a regular visitor to Australia and is always a popular draw card for corporate and sporting events. Sir Viv is an engaging larrikin and insightful commentator on the game who gave 'swagger' new meaning in cricket. 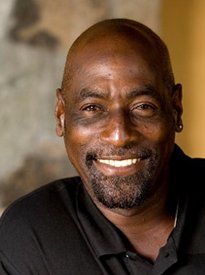 One of the all time cricket legends West Indian cricketer Sir Vivian Richards is a regular visitor to Australia and is always a popular draw card for corporate and sporting events. Sir Viv is an engaging larrikin and insightful commentator on the game who gave 'swagger' new meaning in cricket, Sir Vivian Richards was the most destructive batsman of his era, and while there are many with greater records, few could take on, intimidate, and rip to shreds bowling attacks like he did.

You knew when he was coming. The outgoing batsman would already have disappeared into the pavilion, and the expectation of what was to follow filled the air. Viv kept you waiting... time to ponder. Then he appeared, sauntering, swaggering, arms wind milling slowly. He would take guard, and then, head tilted back slightly and cudding his gum, he would walk a few paces down the pitch to tap it while looking the bowler in the eye. It was calculated menace and magnificent theatre from arguably the most devastating batsman of all time.

Born in St. John's Antigua, Vivian Richards is the most prolific run-scorer for the West Indies at Test level with 8,540 runs from the 121 matches he played. He made 24 Test centuries during his career at a very impressive average of 50.23 and he also became the first West Indian cricketer to make 100 first-class hundreds - a feat he achieved during the 1988-89 season.

But Richards, who was known as 'King Viv' for much of his career, will mainly be remembered for the explosive manner and style of his batting rather than for its end result. As a batsman, he always looked to dominate the bowling and his aggressive approach with willow in hand often appeared arrogant to the onlooker. His lightning-fast reflexes and brute force made up for his unconventional technique and he still holds the record for the most sixes - 84 - hit at Test level.

Richards took over as captain of the West Indies from Clive Lloyd in 1980 and he proceeded to lead a strong side through their most successful era at Test level. He captained them to 27 wins in 50 Tests between 1980 and 1991, while also maintaining his reputation as the world's best batsman over the same period.

In England, he played county cricket for Somerset between 1974 and 1986 and helped them to their first major domestic trophies: the Gillette Cup and the John Player Sunday League title - both in 1979. He then finished his county career with a spell at Glamorgan between 1990 and 1993, ending in style as the Welsh side won the 1993 Sunday League campaign. Richards took over as coach to the West Indies side in 1999.

Viv had the honor of being Knighted for his services to cricket in 1994 and in 2000 was named one of five Wisden cricketers of the century.