Print
Soul Mystique - the world's slickest dance and magical costume transformation artists. Having captivated, mesmerized, and flabbergasted audiences all over the globe with their astounding Dance & Quick Change act. They have been... 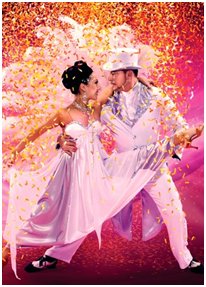 Soul Mystique - the world's slickest dance and magical costume transformation artists. Having captivated, mesmerized, and flabbergasted audiences all over the globe with their astounding Dance & Quick Change act. They have been featured on global television from Australia, UK, France, Asia, and USA. Foxtel's Bio Channel placed them in 'The World's Top-10 Best Magic Acts'; and CNN's Business Traveller quoted them as 'simply extraordinary'. They never fail to mystify, amaze, and entertain their audiences wherever they go.


Gavin and Lydia are Latin American & Ballroom Dance Sport professionals. Trained in the United Kingdom and based in Brisbane, they have represented Australia together on the competitive Dance Sport circuit since 1996. Their titles started at home as undefeated State Latin American Dance Champions, followed by success as Paris, Belgium, and Greater London Latin-American Dance Champions.

They are the only professional DanceSport couple in the world who have successfully merged the two amazing artforms of Dance and magical quick change costume transformations into a spectacular production. Today, they are known as Soul Mystique, the ‘world’s most unique magical dance act’.

Soul Mystique have captivated and flabbergasted audiences all over the globe. Featured on CNN’s Business Traveller & NBC Las Vegas – they captured the hearts of American audiences and were instantly quoted as ‘Spectacularly Breathtaking!’ Not long after, Australia discovered them when they made their Australian TV debut in 2006 at the live and nationally televised ‘NRA Australian Fashion Design Awards’. They continued to be loved and applauded by Australian audiences on Simon Cowell’s international hit reality TV show ‘Australia’s Got Talent’, winning episode 5, and being the most talked about Grand Finalists in the season.

Recently Australian Entertainer of The Year Finalist - Australian Event Awards, 2011 and 2012 Australia’s Got Talent finalist’s. Named as the ‘Jewel and Crown of Australia’s DanceSport’, Soul Mystique dazzled audiences once again as the opening act on Channel 7’s broadcast of the ‘2007 Australian DanceSport Championships’.

They have graced the stages of famous Theatre speakerss around the world and are frequent guest performers in Las Vegas and London’s West End. Their stunning performance was a show closer at ‘Variety Live’ in Las Vegas and ‘Wow’ at the famous Theatre speakers Royal in London’s West-End. Their headline spectacular is also a favourite on some of the world’s largest ocean liners such as the famous Queen Mary 2, Royal Caribbean International, and Holland America Lines.

A partnership since 1996, they are also known as Gavin Skinner and Lydia Lim. "Soul Mystique never fails to mystify, amaze, and entertain their audiences wherever they go"
Subscribe
© 2022 Platinum Speakers