Print
Stephen Brady concluded his Australian Public Service career as Australia’s Ambassador to France. During his 36 years of service he was ambassador to twelve European countries, chief of staff to two Governors-General – including Australia’s first woman – and Senior Adviser to Prime Minister John Howard on two occasions. 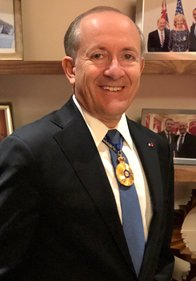 Stephen Brady concluded his Australian Public Service career as Australia’s Ambassador to France. During his 36 years of service he was ambassador to twelve European countries, chief of staff to two Governors-General – including Australia’s first woman – and Senior Adviser to Prime Minister John Howard on two occasions.

Stephen is a keen observer of global affairs and politics, lived through his varied appointments. His diplomatic dispatches required discretion, insight and alacrity in a range of challenging engagements and negotiations, and a capacity to gain the confidence of presidents, prime ministers and monarchs.

Above all he is known for speaking ‘truth to power’, founded in his integrity, steady judgement, and clear sense of fairness.

In 1998, when he was appointed Australia’s Ambassador to Sweden, he became the first Ambassador from anywhere in the world in a same-sex relationship to be officially recognised and received by other states. From Stockholm he also served as Ambassador to Denmark, Norway, Finland, Iceland, Lithuania, Estonia and Latvia where he was responsible for negotiating an extradition treaty to deal with war crimes committed during the holocaust in World War II.

While he was Ambassador in The Netherlands (2004-08), the Dutch government identified Australia as a potential partner for the war in Afghanistan. Stephen became a key link in the negotiations for Australia’s engagement with NATO and the Dutch Armed Forces in Uruzgan Province.

During Australia’s minority government (2010-13), Stephen earned wide respect for his advice to the Governor-General on complex and sensitive political and constitutional issues.

His period as Ambassador to France (2014-17) was momentous and saw Australia and France come together as never before.  After the horrific terrorist attacks in Paris and Nice, Stephen oversaw the close dialogue and information sharing between the two countries on counter-terrorism intelligence. He was intimately involved in the negotiations with the French Government on Australia’s purchase of 12 submarines, the largest defence contract of the 21st century.

At the end of his posting in Paris, the French Government made him a Commander of the Legion d’Honneur, a rare honour making him the highest ranking Australian civilian alive with this award.

He is accomplished in the art of communication and negotiation, and highly attuned to the demands and nuances of different cultural contexts.

He has a strong reputation for outstanding mentoring, encouraging opportunity, commitment and diversity in the workplace, and supporting the needs of individuals within an organisation to allow them to lead meaningful personal lives and give their best to their job.

These are among Stephen’s areas of interest and focus as he settles back into Australian life and his career takes new directions.

In his naturally engaging and straightforward style, Stephen speaks from experience, illustrating the challenges and personalities of our time and making the complex understandable.

International politics and the implications for Australia

The cautions, costs and opportunities of Brexit, the future of the European Union, and global consequences

The social, economic and political impacts of immigration and refugee policy and practice

The disruption of political systems, the rise of populism, and the demands and vulnerabilities of national leaders

Sophisticated insights into the Australia-France bilateral relationship, at every level, from the political, to the economic, the cultural, and the personal

Negotiation across the cultural divide, drawing on the specialised skills of diplomacy applied to a range of complex scenarios