Print
Steve Panozzo's newspaper career began in 1985 when he was appointed Artist-in-Residence at The Manly Daily in Sydney, after which followed an eighteen-month-long stint at Weekly Neighbourhood Newspapers and Community Newspapers in Perth. Then... 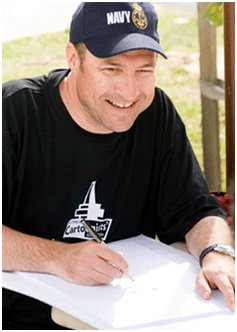 Steve Panozzo travels from NSW
Fee Range: Up to $5000

Steve Panozzo's newspaper career began in 1985 when he was appointed Artist-in-Residence at The Manly Daily in Sydney, after which followed an eighteen-month-long stint at Weekly Neighbourhood Newspapers and Community Newspapers in Perth. Then followed 10 long, hard years at News Limited in Sydney, appearing daily in The Australian and The Daily Telegraph.
The bulk of Steve's printed work spans a host of trade and specialty magazines, including National Newsagent and the Australian Journal of Pharmacy. He is also the resident cartoonist for the world-renowned website, Simple Savings.
Steve Panozzo's corporate presentation caricatures (for birthdays, retirements, etc.) are highly respected and admired. This, and his on-the-spot brilliance, have attracted an impressive client list, including ANZ, KPMG, ABN-AMRO, SSW, AMP, GPT and lots of other companies that can spell their names in full, such as Rheem, Commonwealth Bank, Deutsche Bank, McKinsey & Co., Grant Thornton, Servcorp, Macquarie Bank, L.J. Hooker, blueVisions and Star City.
Steve Panozzo’s has enlivened major international exhibitor events like the International Diabetes Federation Expo, the FIP-PAC Congress, AICUM 2001, The Sydney 2000 Olympic Games... and even featured at Funeral Expo '97. You name the profession, there's an international expo for it, and chances are Steve's been there...
His cartoons and caricatures have appeared in more than 35 books, and his work has been hung in almost 40 exhibitions in Australia and overseas. In 1996, he designed and co-edited The 1997 Phantom Diary for Trielle Corporation, which sold 25,000 copies. He has designed 11 CDs and was appointed official caricaturist for Channel 10's Big Brother TV series.
A Life Member of The Australian Cartoonists' Association, Steve Panozzo served as its President in 1992-93 and again in 1998-99. In 2002, he was nominated by his peers for Best Caricaturist at the annual Stanley Awards.
In 1994, Steve Panozzo was only the third Australian cartoonist to be accepted into America's National Cartoonists' Society. In 1997, Steve represented Australia at the Guinness International Cartoon Festival in Rathdrum, Ireland and in 2006 was invited to be (and took great delight in being) part of the Shrewsbury Cartoon Festival in England.
Subscribe
© 2022 Platinum Speakers