Print
Steve Waugh AO -Australia’s most successful and loved Cricket Test Captain. Steve’s astonishing sporting talents have been recognised with the awarding of the prestigious Alan Border Medal, the inaugural Steve Waugh Medal and, under his... 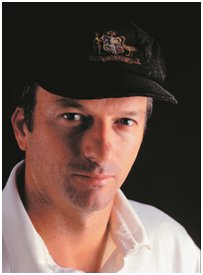 Steve Waugh AO -Australia’s most successful and loved Cricket Test Captain. Steve’s astonishing sporting talents have been recognised with the awarding of the prestigious Alan Border Medal, the inaugural Steve Waugh Medal and, under his captaincy, the honour of ‘Best Team in the World’ at the Laureus Sports Awards in 2002. In 2003, Steve was awarded the Order of Australia for his services to both cricket and charity and in 2005 he was awarded the Australian ‘Father of the Year’.


Steve has an enviable reputation as an author, writer, and inspirational speaker and in 2007 threw himself even further into the public spotlight when he launched his charitable foundation in Australia, The Steve Waugh Foundation»
Steve Waugh was spotted as a talented cricketer at the young age 17. He was selected for the New South Wales side while playing first grade cricket in Sydney, and wore the baggy green cap for the first time in 1985, on a tour of South Africa. Steve Waugh has played representative cricket for Australia since 1985, retiring in January 2004. His incredible career, spanning more than 18 years, has produced some outstanding moments in Australian sporting history. Who could forget his 200 against the West Indies at Sabina Park in 1995, his twin centuries against England at Old Trafford in 1997, or his daring 120 against South Africa in a must-win match at the 1999 World Cup.
Captaining the Australian Test team from 1999 to 2004 and the one-day side between 1997 / 98 and 2001 / 02, Waugh's leadership qualities have been described as 'inspiring'. "I try and instil faith in the players and give them self-belief and really empower them to be the best they can be".
Although better known for his cricket prowess, Steve Waugh is passionate about helping those less fortunate than himself. His favourite personal philosophy on life is "If you don't stand up for something, you'll fall for everything". This philosophy was put to the test when, during a visit to India in 1986, Steve saw children and adults suffering from disease and poverty. He was struck by those suffering from leprosy and their families and was prompted to get involved. For the past three years Steve has been actively assisting these families through his support of the Udayan Home in Barrackpore, India. The home takes children out of their leprosy environment and provides them with education, healthcare and opportunities in life.
Steve Waugh is also working with young people in Australia, through his work as a patron of Camp Quality and the conductive Education Unit for the Spastic Centre of New South Wales.
Australians love to hear about Steve Waugh's journeys and cricket tours and so he has become Australia's best-selling sports' author, and a much loved Australian. As a cricketer
Steve has broken many records. As a person he is a great humanitarian and brings hope to those in need. He is an inspirational speaker, not only for sports-loving Australians, but for many worldwide. Always leading by example, Steve Waugh is an extraordinary Australian.
Subscribe
© 2022 Platinum Speakers