‘Last Man Standing’ Steven Bradbury OAM is an inspiration to all, achieving Winter Olympic Gold, Steven’s story is one that must be heard. Steven Bradbury is one of the world’s most colourful Olympic champions. Steven has an impressive career as an Olympic athlete that has been driven by determination, sacrifice and most importantly a will to succeed. 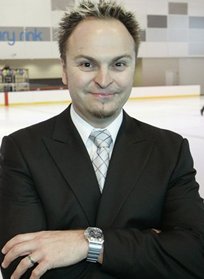 I recently had Steve speak at one of our events. This was the third time and once again we have had glowing reports from our guests. He is intelligent, witty, entertaining and inspiring. One of the best speakers you can get and he delivers every time. Cant wait to have Steve back again for future events.


We hired Steven Bradbury to MC the launch of our TBC (Telstra Business Centre) Solutions platform.  He did an amazing job intertwining our event goals, his own Olympic story, motivation and kept us all laughing throughout.   Steve added the celebrity angle and his professionalism, homework on our company and our people 'hit the mark' perfectly.  Anyone looking for a motivational speaker or an event MC Steven Bradbury should be at the top of your list.  Thanks Steve for helping make our product launch memorable.

Thanks so much for being our MC and making our event even more special.  Everyone in attendance had a fantastic evening and loved your motivation and humour on the microphone.  They also enjoyed that you stayed around for drinks and a chat with everyone after your official duties were over.
Many thanks again for helping to make our evening a success and I look forward to future events.
Bobbie Black – SHERIFF ELECTRICAL WHOLESALEERS

Thanks so much Steven - you were a star on the day and I had wonderful positive feedback on your presentation from so many people. You have woven your story around a message that resonates with everyone.   You held 2200 people in the palm of your hand for over an hour - at the end of a long day that is no easy thing to do so congratulations and thank you.
Wendy Alexander – CEO – BARFOOD AND THOMPSON

Steve surprised me with his prior research and immediate understanding of the specific requirements of the Linfox Active Recovery project.  He speaks with conviction and demonstrates empathy towards his audience. Steve, provides appropriate humour when memorable impact is required of a seemingly dull but necessary topic. His focus on workplace safety & recovery from workplace accidents, as a result of his own life experiences, has provided insight, benefit and relief to many.   Anyone who wants their team to be motivated, entertained and inspired, Steve is the man!
John Gorman – GORMAN ENTERPRISES

It was great listening to Steve’s presentation. Probably the best I have seen in 40 years!
Professor Ron Bewley – CHIEF INVESTMENT OFFICER – COMMONWEALTH BANK

Steven’s presentation was great. It was delivered well and contained the right amount of humor and business references to suit the audience.
Mike Buzzard – BHP BILLITON

We were looking for a speaker who could engage a group of people who had encountered the most difficult period in the their working life. Steve Bradbury not only engaged the group, but was able to communicate a number of key messages that lifted the feel of the entire conference. His messages were extremely strong and could be easily assimilated to the audiences personal situation. The feedback from Steve’s presentation has been overwhelming, we would recommend Steve to any business who is looking to re-energize and engage.
Peter Ornsby – NATIONAL MANGER DISTRIBUTION – RETIREINVEST

‘Last Man Standing’ Steven Bradbury is an inspiration to all, achieving Winter Olympic Gold, Steven’s story is one that must be heard.

Steven Bradbury is one of the world’s most colourful Olympic champions. Steven has an impressive career as an Olympic athlete that has been driven by determination, sacrifice and most importantly a will to succeed. With the same passion as Steven has shown on the ice, he has continued his success as a motivational speaker and master of ceremonies to corporate clients, schools, sporting clubs and charities and many more.

Steven Bradbury's remarkable and unlikely victory at the 2002 Salt Lake City Winter Olympics was achieved after a spectacular final-lap spill took out his four rivals. Bradbury threw his arms up in disbelief and smiled as he crossed the finish line. His warm friendly nature, down to earth manner and use of humour is sure to help ‘break the ice’. The Bradbury story is one of the true Aussie battler who overcomes much adversity to achieve the ultimate goal.

Steven’s presentation entitled ‘Last Man Standing’ includes Audience participation - You will touch and handle Steve's Olympic Gold Medal, Great stories, an inspirational poem, His father’s influence (instilling a work ethic and lessons learned), Business success through his speed skate making company, A 3 part DVD inc.: intro, blood spilt on the ice and reliving that Olympic final through his eyes, When your moment to shine presents itself, will you be in position, and prepared “to Do a Bradbury”???  As well as being entertained and inspired your audience will be left with a lasting impression that much of the prize is in the journey and that success takes Passion, Persistence and Teamwork.

Some people have described Steven Bradbury’s victory as lucky. Winning Olympic gold took a lot more than just luck. The same as in business, strategy and planning were key ingredients in that success. Four Olympic campaigns and 12 years of hard training including an Olympic Bronze in 1994, 111 stitches in his leg and in the year 2000 a broken neck are testimony to that hard work and persistence. 18 months after breaking it that same neck was supporting an Olympic Gold Medal.

Steven’s story touches a chord with people from all walks of life and is a prime example to all that if you "Stick it Out" You too can be the Last Man Standing.

Steven was also recently awarded the Order of Australia Medal on Australia Day in 2007.

Steven also enjoys the role of MC (Master of Ceremonies) and is also available to facilitate conferences.  His vast experience onstage allows him to be relaxed, informative and entertaining.  Steven is one of Australia’s most well known Olympic Champions and adds the celebrity angle to any event.

The roles of MC (Master of Ceremonies) and Conference Facilitator require preparation and Steven always works with his clients prior to the event to ensure no detail has been overlooked.

Combining Steven as both MC and Motivational Speaker or Entertainer at the same event is becoming popular.  This dual role allows you to save some of your event budget for something else.

Just like in sports business is about showing up everyday and giving it your best. When your moment to shine comes, will you be in position, and prepared “to DO A BRADBURY”.

As well as being entertained and inspired your audience will be left with a lasting impression that much of the prize is in the journey and that success takes PASSION, PERSISTENCE and TEAMWORK.

Steven’s presentation can also include the LAST MAN STANDING AUCTION


Steven can also present on topics such as....

The sporting world is high Risk, high Reward.
Just before the race with the epic pile up that led to Steven Bradbury winning Australia’s 1st Winter Olympic Gold Medal he spoke to his coach Ann Zhang.  Finally Steven had developed experience and judgment.  It had taken him 12 years of obsessive training, 4 Olympics Campaigns, 111 stitches in his leg, four litres of blood on the ice and a broken neck.

Now Steve and his coach knew everything:
-Youthful exuberance = 0%
-Over Confidence = 0%
-Knowing the competition = 100%
-Knowing your own limitations = 100%

Everything is Risk VS Reward.   Steven Bradbury won Australia’s 1st Winter Olympic Gold Medal through strategy and planning.  Steven knows he was lucky, he is probably the luckiest Olympic Gold Medalist in history.  In his OHS presentation Steven demonstrates that success in business is about minimizing the risks so that when your opportunity to shine presents itself, you will be in position and prepared to be the next to ‘Do A Bradbury’.
Fact – Thanks to Olympic historian Harry Gordon, in November 2014 the term ‘Doing A Bradbury’ is now in the Macquarie Dictionary! Before the final Steven and his coach devised that staying out of the way would get him a bronze medal.  That strategy got him the gold.

Key messages in this presentation:

1: Positive Mindset
Fuelling your body to keep your mind switched ON.  Meaning not showing up for work hungover from the night before or having eaten McDonalds all week.  This puts you and your work mates at greater risk. We all have tough days at work but if you tell yourself enough times, today will be a good day, you start to believe it. Negativity breeds quickly.  There is no reason to focus on things you can’t control.  Break the negativity cycle by developing 'Triggers' to switch the positivity back ON.  One trigger Steven used during his skating career was a sign on the ceiling that read ‘this is the Olympics get up’.  It's the first thing he saw every morning when his alarm went off at 430am.  He knew if he didn't get up and got beaten at the Olympics that he’d regret it.  What Trigger can you develop to keep your mind switched on to positive?  No Regrets!

2: Teamwork
The ‘jack of all trades’ doesn't really exist anymore.  You need to become expert at your role and rely on your teammates/workmates to execute their role properly as well.  A team is only as good as its weakest link.

3: Experience and Judgement
Rules, guidelines and procedures are in place for a reason.  Usually because somebody in the past has cut a corner to save a little bit of time to clock off 15 minutes earlier, resulting in accident, injury or even death.  Most Aussies gain experience and judgement by learning from their mistakes and then getting it right.  The consequences of this attitude in the workplace can be dire.  The best way to get experience and judgement is to listen and learn from those who have been doing what your doing for a lot longer than you (normally your superiors).  Short term gain  =  Long term pain.

4: Steven’s own injuries and recovery process from:

* A skate blade skewered his thigh.  It cut all 4 quad muscles and 3 veins, causing him to lose 3/4 of his blood in 60 seconds (audience sees the crash video).  Steven could feel his eyes closing, his organs shutting down.  He knew if he lost consciousness he was going to die and that was not an option.  After almost dying on the ice ‘a bad day at the office’ didn’t seem so bad.   This positive mindset allowed Steven to pursue his goals with more passion than before.

* A broken neck during a training crash and wearing a halo brace screwed into your skull for 2 months (audience sees photos).  During that 2 months Steven had lots of time to think about the ‘Big Picture’.  People often overlook thinking big picture, and in the workplace, this leads to complacency.  After he broke his neck everyone around Steven told him that it was time to quit, the doctor told him he would never skate again.  Steven went to another doctor.  The big picture told him that after the halo brace had been removed he had 18 months until the next Olympics.  Before breaking his neck Steven’s had one goal in life – Olympic Gold.  After 3 Olympics campaigns it had not been achieved and was no longer realistic.  This is where Steven’s mindset changed from Outcome to Process.  He longer cared where he finished at the Olympics he would just do everything he and his team knew to the best of his ability every single day for 18 months and see what happened.  In the workplace goals and OHS are achieved by focusing on the process not the outcome.

Steven Bradbury is highly skilled at working client objectives into his presentations.   Clients looking to instil specific OHS / risk management / teamwork related issues into their staff Steven Bradbury can help you do it.