Stirling Mortlock was a fierce competitor on the field.  A legend in the arena of Rugby Union, Stirling Mortlock led a stellar career playing for his country. Passionate, committed and dedicated, Stirling is an inspiration to many. 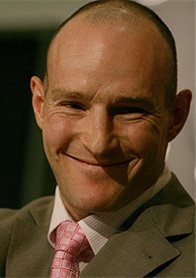 Testimonials for Stirling Mortlock AM

Stirling was extremely engaging with our guests. He showed a keen interest in our business and was asking a lot of questions of all on the main table to get a better understanding. Stirling is a confident speaker, and I would recommend him.
Vestas

Rugby union legend Stirling Mortlock is a former captain of the Wallabies, the ACT Brumbies and the Melbourne Rebels and one of Australia's greatest ever players. He has scored the third most Super Rugby points of all time with 1036, and stands fourth on the all-time list of Wallaby point scorers with 489.

Stirling Mortlock was plucked out of club rugby by the now famous Rod Macqueen at the age of 20 to tour Argentina with the Wallabies in 1997.  In 1998, Stirling joined the ACT Brumbies and after a couple of solid seasons of Super 12 made his Test debut v Argentina in 2000.

Stirling burst on to the world stage in staggering fashion in his debut international season in 2000, breaking numerous records in his first seven Tests. That year he became the fastest Australian to reach 50 and 100 Test points, scored the most points and highest number of penalties (16) by an Australian in his first five Tests, created history by becoming the first Australian to score 20 or more points in four consecutive Tests, and was instrumental in the Wallabies' Bledisloe Cup win and their first ever Tri Nations victory.

It became apparent from very early in Stirling's Wallaby career that he was a big match player - no one will forget his man-of-the-match performance and his 80-metre intercept try at Telstra Stadium to help knock the All Blacks out of the 2003 Rugby World Cup semi final. Stirling succeeded George Gregan as ACT Brumbies Captain in 2004 and with instant success, lead the team to claim the prestigious Super 12 title. This was the second Super 12 title that Stirling has been part of (the other was in 2001).

In 2006, Stirling was passed the honour of becoming the 73rd player to Captain the Wallabies. Stirling lead the team from the front and they claimed the Cook Cup from England. In 2007, Stirling continued to lead the Australians through Tests victories against Wales and Fiji, before guiding the team to wins over New Zealand and South Africa. Stirling celebrated his 50th Test against the Springboks in Johannesburg, played an instrumental role in the Wallabies 20-15 upset over the All Blacks at the MCG, setting up Scott Staniforth for the match-winning try that was ultimately judged Try of the Year at the annual John Eales Medal dinner.

In 2007, Stirling received his greatest honour when asked to captain the national team at the Rugby World Cup in France.

On the field, Stirling Mortlock was a fierce competitor who regarded representing his country as the ultimate honour; ARU CEO John O'Neill has called him a 'real captain courageous' and an 'inspirational leader'. Opponents and rugby followers alike considered Stirling the hardest running centre in world rugby, constantly using his immense strength and sharp footwork to breach the defensive lines of his opponents.

Stirling is a Bachelor of Science graduate from the University of Sydney, an intelligent and articulate individual as passionate about life as he is about football. Retiring from professional rugby at the end of the 2012 season, Stirling Mortlock is now a Consultant at NAB and an Ambassador for the Melbourne Rebels.

As a recent long standing Wallabies Captain, Stirling Mortlock is ideally placed to speak on topics that include goal setting, concentration and focus, team work, training and practise, skills and drills, overcoming obstacles, work/life balance, maintaining a positive attitude after setbacks, and leadership.

Stirling loves to talk - he is a passionate, level-headed and an extremely articulate person who really enjoys sharing his experiences.

When you think of Stirling Mortlock you think "Tough, Competitive & Never-Say-Die Attitude".  Stirling has enjoyed many successful long-term relationships with some of Australia's leading companies.  There's something about Stirling that appeals to almost everybody and it is this quality that perfectly positions Stirling as the man to deliver your company message.

Stirling has a wealth of experience having Captained every team he has played for  including the ACT Brumbies, the Australian Wallabies and the Melbourne Rebels. He has nine years of leadership experience and over that time has grown and developed his philosophies on Leadership and driving success. Stirling can bring his unique experience and inspirational personality into your boardroom or workplace to help motivate, inspire and refine your business goals to help drive success.