Stuart Gregor is co-founder of Four Pillars Gin, Australia’s No.1 craft spirits business, whose gins are now available in more than 20 markets around the world.   Stuart has earned a reputation as an MC, auctioneer, commentator and occasional speaker on the subject of, mainly, himself and some of his more colourful exploits, particularly in the worlds of gin, marketing, small business, journalism and what it takes to turn a passionate hobby (drinking) into a viable business career. 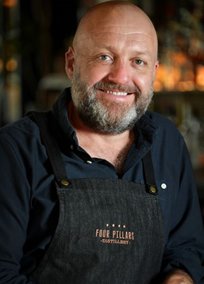 Stuart Gregor recently spoke at our MFA 5+ Inspiration Event.  He spoke on the topic of BRAND YOU! He was extremely engaging and entertaining.  A big personality, with authentic characteristics than resonated with the 250 people who attended.

Some of the comments were:

• Great style and down to earth and relatable

• He is the “class clown” and he is a true blue honest person, which is refreshing!

He nailed the topic, and personalised with many life experiences.

Stuart Gregor has donated his services as MC and auctioneer at our annual gala dinner (Cerebral Palsy Alliance’s major fundraising event) on a number of occasions.Stuart is always highly entertaining, energetic and engaging.  He held the attention of a large and boisterous crowd whom he engaged in a highly profitable auction and event which raised over $2 million on the night. The feedback from our guests confirmed Stuart’s humour, charisma and skill as both public speaker and auctioneer. He is pure gold!!!

Thank you so much for last night.  You rocked.  You really did. Never before have we finished on time!  And never before have people enjoyed the auction as much! It’s a hectic night but you had it completely under control.

Where auctions at charity events can often alienate much of the room who aren’t bidding leading to chatting and thus impacting on the effectiveness of the auction, Stuart’s approach makes for a great spectacle that captures the attention of the room. While the fact that he is also extremely funny means that those lucky winning bidders are invariably delighted when the item is knocked down to them, and smiling when they part with the money. Something I think is crucial to maintaining that positive relationship between guests and the charity.

Stuart Gregor is co-founder of Four Pillars Gin, Australia’s No.1 craft spirits business, whose gins are now available in more than 20 markets around the world.

Before creating Four Pillars in 2013 Stu was a drinks industry veteran having run leading marketing firm Liquid Ideas for almost 20 years, written several wine guides, judged wine shows, made wines alongside Cameron Mackenzie (his chief collaborator in Four Pillars) and advised many of the best known drinks, food and travel brands in the world.

He has been President of the Australian Distillers Association since 2014.

Stuart has earned a reputation as an MC, auctioneer, commentator and occasional speaker on the subject of, mainly, himself and some of his more colourful exploits, particularly in the worlds of gin, marketing, small business, journalism and what it takes to turn a passionate hobby (drinking) into a viable business career.

In the world of public relations, he founded Liquid Ideas in 2000, was the inaugural Chair of the Public Relations Council (2012-2014) and the PR industry Leader of the Year in 2014. Liquid Ideas has won multiple awards and widespread recognition for its campaigns for clients as diverse as Singapore Airlines, Victoria Bitter, RUOK? Day, Canadian Club and Rexona.

Stuart has a Diploma of Wine Marketing (Adelaide), Master of Marketing (Melbourne) and is a Graduate of the Australian Institute of Company Directors. He sat on the board of Australia’s leading food waste organization Oz Harvest from 2012-2019 and is co-owner of luxury travel firm Gregor & Lewis, with his sister Melinda.

Stuart is a father of two based in Sydney who follows every code of sport imaginable with a particular love for the mighty Sydney Swans, Eastern Suburbs Roosters and the Wallabies.

The Four Pillars story - How three blokes decided one day the world needed its greatest gin to come from Australia. And somehow they seem to have achieved that goal.

Passion and purpose in business - How the bottom line will look after itself if you care enough about your job and others.

Follow your Dreams - Dreams are for kids; plans are for adults. How do you go from having a dream and turning it into reality – a case study and some general tips you’ll never want to forget.

The Spirit of Australia - Why and how an Aussie spirit became the best in the world – including a tasting of four different Four Pillars gins.

Standing up to the big boys - Why the best brands of the future won’t be big and old but instead, small and young.

The Marketing Myth - Why almost all “marketing” is essentially bullshit.

Is all publicity good publicity? - A PR pro and business owner answers this conundrum once and for all.