Print
Best known for his portrayal of Habib in the hit comedy TV show "Fat Pizza", Tahir is one of Australia’s funniest comedians. His engaging style of comedy allows him to work with any audience and he is a proven performer who is constantly in demand. 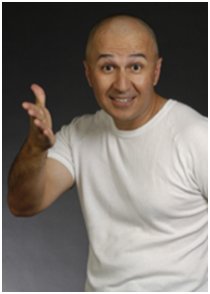 “Outstanding … comfortable and so quick with the audience.”
Melbourne Age

“Top of his game … finest stand-up comedians in this country.”
Adelaide Advertiser

“Quite simply the best stand-up comedian we have ever had … brilliant!”
Canterbury BMW

“A natural comedian.”
The Age

"Brilliant! Really knows how to work an audience”
The Telegraph
Tahir travels from NSW
Fee Range: $5001 to $10000

Best known for his portrayal of Habib in the hit comedy TV show "Fat Pizza", Tahir is one of Australia’s funniest comedians. His engaging style of comedy allows him to work with any audience and he is a proven performer who is constantly in demand.

Tahir is one of Australia's busiest comedians. He has been a feature in all comedy venues around the country and had numerous television appearances.

Tahir was named Comedian of the Year and has even been Logie nominated. He has worked for the who's who of the industry and has been booked for countless private and corporate functions. He is a regular at major Comedy Festivals, on panel shows, television debates and even Celebrity Theatre Sports.

Tahir has been involved in some of the most successful stage and screen productions. In 2004 he appeared in the fourth series of PIZZA on SBS as the much loved and hilarious character 'Habib'. He was also an integral member of the team in the hit movie 'Fat Pizza'.   In 2003 'Lord of the Kebabs' was a runaway success and eventually played to over 20,000 people in over 100 shows right around the country. More recently he has hosted the smash hit comedy stand up production 'Show Us Your Roots. His most recent shows were 'Hollywood Kebabs' and 'Live and Circumcised'.

Having performed standup comedy for over a decade, Tahir finally released his first DVD 'Tahir Live' He has also hosted the successful 'Best of the Footy Show Comedians Volume 2' DVD. Tahir is in constant demand and is a proven performer.

The little known fact that Tahir was a Drama School teacher also has enhanced his expertise as a corporate performer - he won't have everyone turning themselves into trees but expertly tailors material whilst ensuring his engaging style suits all situations.

A seasoned comedian and entertainer, Tahir really has performed everywhere and worked with the who's who of the industry. He was the Qantas in-flight comedian for 12 months and performed overseas in New Caledonia where he was the Club Med comedian for two seasons.

Tahir has appeared at countless private and corporate function, sports nights, auctions and Celebrity Theatre sports. He's also in demand as an entertainer at weddings. He skilfully uses props, magic and music as well as performing straight stand-up.