Print
TAP DOGS have tapped their way around the world with their amazing, award winning fast paced tap routines. Combining high-energy dance, theatrical performance and live music, TAP DOGS is a show you will not want to miss! 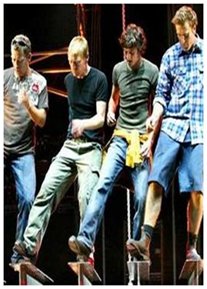 “Fantastic and frantic, incredible and impressive…Genuine genius may be the only apt way to capsulise the choreographic power…”
Meachum News

“This is a tap spectacle to be sure….”
Washington Times

“Raw, hot and sweaty, full of energy and quite simply bloody brilliant entertainment that shouldn’t be missed…”
Stage Whispers

“It all adds up to exciting, breathless entertainment…”
What’s On (London)

TAP DOGS have tapped their way around the world with their amazing, award winning fast paced tap routines. Combining high-energy dance, theatrical performance and live music, TAP DOGS is a show you will not want to miss!

TAP DOGS is now approaching 20 years of global success, having performed in 330 cities in 37 countries around the world. 11 MILLION PEOPLE CAN’T BE WRONG!

Set on a construction site in Australia, eight characters perform to the beat of their own drum. In water and upside-down, the TAP DOGS bring the entire space alive with their awe-inspiring mix of dance, music and performance!

The show started with six guys from a steel town north of Sydney, Australia.

Australian DEIN PERRY, creator and choreographer of TAP DOGS, has come a long way from the garage behind his dance teacher's house in Newcastle, a steel town north of Sydney where, as young boys, he and the "Dogs" learned how to tap. At the age of seventeen, with no opportunities in sight for a dancing career, he earned his union papers as an industrial machinist before moving to Sydney where he tried to break into show business. Small chorus parts in Broadway-style musicals led to Dein's big break when he was cast in the long-running Sydney production of 42nd Street.

When it closed, Dein decided to create a contemporary show around the themes of his industrial experience with his Newcastle tap-dancing mates.

With a small government grant, Dein contacted his old friends, who had also taken up various 'real' jobs by this time, and formed 'Tap Brothers', a very early incarnation of TAP DOGS. From this, Dein was offered the chance to choreograph the West End musical Hot Shoe Shuffle, which brought the group to London and earned Dein his first Olivier Award in 1995. A subsequent offer from the Sydney Theatre Company led to the collaboration with eclectic designer and director NIGEL TRIFFITT, which resulted in the creation of TAP DOGS.

TAP DOGS was the instant hit of the Sydney Theatre Festival where it had its world première in January 1995 and where Back Row's founders Peter Holmes à Court and Liz   Koops first witnessed the magic of Dein Perry's revolutionary show. The success was infectious.   After sell-out seasons at home, the Dogs were catapulted to international acclaim at the Edinburgh Festival and London's Sadler's Wells. Since then, the show has toured continuously throughout the world, appearing in over 330 cities on six continents with up to four companies touring at any one time. TAP DOGS has been seen by over 11 million people.

Along the way TAP DOGS has chalked up some memorable milestones: an Olivier Award-winning six-month run on London's prestigious Shaftesbury Avenue, conquering New York and America, winning over 11 international awards for the show's creators Dein Perry, Nigel Triffitt and Andrew Wilkie including a Pegasus Award at the Spoleto Festival in Italy and an Obie in New York. A worldwide television audience of 3.4 billion saw a thousand Tap Dog's performers appear in the Opening Ceremony of the 2000 Sydney Olympics.

The TAP DOGS story has gone on to be immortalised in the movie BOOTMEN, directed by Dein Perry and inspired by his TAP DOGS experiences. The film was released at the end of 2000 and played in cinemas worldwide.

And today - TAP DOGS continues to take the world by storm! The story continues...! So, join in the fun. The boys have their moves and the girls have their grooves in this fast paced, unstoppable theatrical spectacular. TAP DOGS is a show that absolutely everyone will enjoy!
Subscribe
© 2022 Platinum Speakers