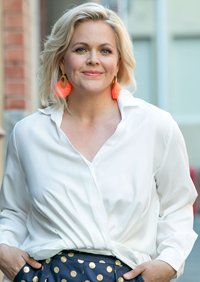 “Not surprisingly, Taryn has rated as our most valued external speaker. The feedback has been overwhelmingly positive, with many participants sharing their profound insights and empowerment to act differently for the betterment of themselves, their daughters, friends and family.”

“On the day she delivered a memorable, punchy session with new content that had everyone laughing and leaving inspired - just what we were after! The session was really well-reviewed with delegates commenting on the passion that Taryn brought to her session. Thank you!”

“From a Google perspective we just love what Taryn brings to the table. We go at it from a data perspective, thinking deeply about the things we can do to change the world and we love how Taryn connects the data and the emotion together. Awesome and amazing presentation.”

“Taryn was a hoot to work with! She brought our audience to their feet with her no-holds-barred approach to loving their bodies more and bringing an awareness to the issue with an unparalleled level of passion and enthusiasm that only Taryn can.”

Taryn Brumfitt is the fiercely passionate thought leader behind the Body Image Movement. Best-selling author and director of the inspiring social-change documentary Embrace, Taryn’s global crusade to end the body dissatisfaction epidemic has seen her recognised by the United Nations Women, Amy Poehler’s Smart Girls and the Geena Davis Institute.

Taryn’s determination to shift the way the world thinks about themselves and their bodies has the support of high-profile personalities including Olivia Newton-John, Rosie O’Donnell, and Ashton Kutcher who famously praised her activism as being “good for the world.”

Named alongside Beyonce and Emma Watson in Germany’s Brigitte magazine’s ‘Woman of The Year’, Taryn’s positively infectious voice and powerful message has reached over 200 million people via the likes of the L.A Times, Washington Post, The Doctors, Good Morning America, The Project, Australian Story and The Today Show.

Embrace is a social impact documentary that explores the serious issue of body loathing, inspiring us to change the way we feel about ourselves and think about our bodies. Released in 2016, the film is relevant, relatable, highly engaging – but above all life changing. Nominated for the Documentary Australia Foundation Award for Best Documentary, Embrace has been seen by millions and has created a ripple of positive change across the globe. The documentary was supported by 8909 Kickstarter pledgers who responded to the fundraising trailer released in 2014. The trailer has now had over 45 million views.

Author of three bestselling books, her first title ‘Embrace’ was a US smash hit and the animated song from her latest title, a children’s book ‘Embrace Your Body’ bumped Baby Shark off iTunes number 1 spot!

Taryn’s work has been recognised all over the world, by United Nations Women, Amy Poehler’s Smart Girls, the Geena David Institute and Ashton Kutcher who famously praised her activism as “good for the world”.  However far from slowing down, Taryn is approaching her most important goal yet – body image positivity for kids.  Her documentary ‘Embrace Kids’, currently in production, will launch in 2022.

Taryn draws on her personal and professional life experience, along with leading industry research, to deliver inspirational messages in the areas of leadership and building high performance teams, body image, breaking the rules to achieve your goals and social change.

Taryn is also a proud Foundation Board member for The Hutt Street Centre. She lives in Adelaide with her three children.

• Finalist Australian of the Year Awards 2019

• Awarded the South Australian Award for Excellence in Women’s

• Finalist 100 Women of Influence by The Australian Financial Review 2018