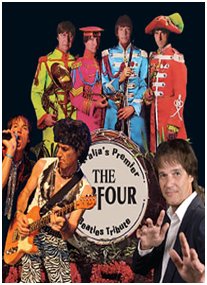 Testimonials for The Fab Four

Five Versatile Musicians - Create Three Live Bands - One Ultimate Tribute Show
Jumping Jack Flash
Jumping Jack Flash has the energy and pure rock and roll entertainment that encompasses The Rolling Stones. Fronted by the most talented ‘Mick mimic’, the band play tribute to ‘The Greatest Rock and Roll Band in the World’.
The Fabfour
The lights dim, the excited audience applaud, The Fabfour, Australia’s most recognised tribute band take the stage.
The Fabfour, established in 1992, have toured throughout the world with an outstanding history of success, performing at major corporate events and large concerts.
100% Cliff Richard
Sir Cliff Richard is known to many as the Peter Pan of Pop and has been a musical icon for more than four decades. 100% Cliff Richard performs the all-time classics such as ‘Summer Holiday’, ‘Living Doll’, ‘Congratulations’, ‘Devil Woman’, ‘Carrie’, ‘Wired For Sound’ and many, many more!
Subscribe
© 2022 Platinum Speakers