The Idea of North

Print
The Idea of North is now firmly established as a world class act. They are undisputed masters of a musical style that continues to thrill audiences wherever they perform - in Australia or aroundthe world. Official recognition of... 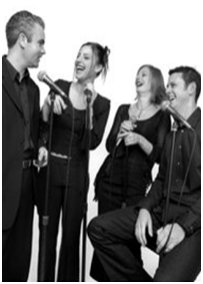 Testimonials for The Idea of North

The Idea of North's Biography

The Idea of North is now firmly established as a world class act. They are undisputed masters of a musical style that continues to thrill audiences wherever they perform - in Australia or aroundthe world.


Official recognition of that ‘world class act’ tag came in 2003 when they won The Harmony Sweepstakes – the largest international open a cappella competition in the world. The Idea of North was the first non-US group to win this prestigious award in its twenty-year history. At the same competition they also received the ‘audience favourite’ and ‘best arrangement’ awards.
Described variously as simply an ‘a cappella quartet’, a ‘jazz vocal quartet’ or by James Morrison as ‘the best contemporary a cappella quartet in Australia’, The Idea of North has established a national and international reputation that now sees them travelling widely and often throughout Australia, the USA, Asia and Europe for concert performances, festivals, workshops and master classes.
Now regarded by their peers as undeniably unique and one of the best live musical acts in the world, they have reinvented a cappella and taken it to new heights. The Idea of North’s incredible sound and superb arrangements, coupled with their relaxed presentation and endearing sense of humour have made them a live act which goes well beyond the extraordinary quality of their recordings.
They have now produced four CDs, the two most recent of which have been released on the ABC Classics and Jazz label. Their first album on this label ‘Here and Now’ is the highest selling ABC Jazz album ever produced. The second continues to showcase their amazing vocal skills, captivating arrangements and eclectic repertoire. All are superbly produced and meticulously engineered.
The Idea of North has been shaping their unique sound since first forming in 1993. It’s a style grounded on the exceptional musicianship that these four talented performers crafted at two of Australia’s finest tertiary music schools and continues to be honed through a solid writing, arranging and rehearsal regime and through their hundreds of performances each year.
Subscribe
© 2022 Platinum Speakers