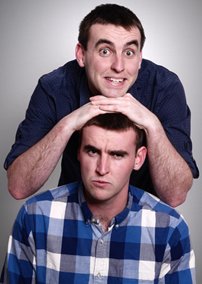 Testimonials for The Stevenson Experience

"These guys are stars. I laughed until my face hurt and I thought my cheeks would burst. Nothing I can say will make it as awesome as being there."

"The stars of the night are musical duo The Stevenson Experience with their hilarious songs about relationships and everything they know about women."

“I couldn’t drink my beer because of tears of laughter streaming down my face.”

"An incredibly funny and polished two man musical experience that would have almost made Flight of the Conchord’s look like a bland episode of Everybody Loves Raymond."

Benjamin and James Stevenson are identical twin brothers who combine to form the musical comedy duo The Stevenson Experience. They have placed in the Grand Final of every national comedy competition in Australia, and been crowned the nation’s funniest new comedians.

In addition, both Benjamin and James Stevenson are Founders and Associate Directors of the Canberra Comedy Festival, the biggest comedy event in the ACT.