Print
Sensational performance entertaining many audiences around the world, The Three Waiters are a huge corporate success. Engaging, thrilling and uplifting, audiences are left wowed and excited as their hoax plays out into a spectacular show. 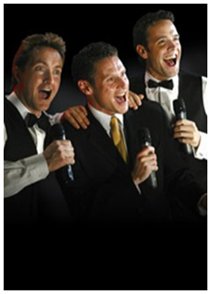 Testimonials for The Three Waiters

"Thank you for the most wonderful and organised way of entertaining a group of normally very spoiled and jaded Hoteliers!! I think we received more compliments about your involvement than anything else at the conference! "
Tim Hadcock-Mackay B.KTO. Osj Chairman, Grand Heritage Hotels International

"Although we had the Marquess of Salisbury and Barry Cryer speaking at the event, the most memorable thing for our guests were the waiters as they were unexpected and all had such amazing voices…."
Jill Coggins, PA to Chief Exec, Hertfordshire Chamber of Commerce and Industry

"The talent, enthusiasm and professionalism the singers showed behind-the-scenes made it a pleasure to work with them throughout the experience…."
John C Pickett, Executive Director Indianapolis Opera

"At one point during the performance I saw two ladies at different tables reduced to tears - now that's powerful! I will most definitely be booking them again at future events and I understand two of the Pharmaceutical companies represented that evening will also place bookings…."
Sandra Rafferty, Med Cal

"I knew you had pulled it off in stellar fashion when the likes of Hugh Hefner, Bob Saget, Pauly Shore, Molly Shannon, Paul Rodriguez, Dick Van Patten and many other famous celebrities greeted your performance with rave applause you were the highlight of the evening!.... "
Kevin McNally, President/CEO Milestone Productions INC

"Your performance during the Gala Dinner was truly fantastic and so many people approached me afterwards to say how much they enjoyed it…."
Mark Fryer, Head of Private Banking, NatWest Finance

"Your "Three Waiters" were stupendous! They are awesome! To say they were a hit would be a major understatement! Everyone was overwhelmed and gave them a roaring standing ovation! We all felt so honored to have been part of such a glorious performance! "
Susan S Allen, Director, Providence Healthcare Network

"Last Thursday evening, The Three Waiters performance for our corporate client was brilliant to say the least. All three performers couldn't have been more 'on' with their singing capabilities, their appearance and interaction with the audience…." Brian Rodwin, B Rodwin & Company INC

"I would like to sincerely thank you for helping us to make the Premier's Variety Club Ball a night to remember. The evening was a success in every sense of the word…."
Danielle Ewings, Corporate Development, Variety Club of Queensland

"Well, what can I say. The Three Waiters were a great hit with all our guests…."
Jan Savage, Fund Development Mgr, Victor Chang Cardiac Research Institute

"They were such a hit! Our guests absolutely loved them and we have had many calls asking who they were and wanting more information…."
Jo Victor-Smith, Events Mgr, The Duke of Edinburgh's Award
The Three Waiters travels from NSW
Fee Range: POA

Sensational performance entertaining many audiences around the world, The Three Waiters are a huge corporate success. Engaging, thrilling and uplifting, audiences are left wowed and excited as their hoax plays out into a spectacular show.

The Three Waiters is the most successful corporate, private event and wedding singing waiters surprise act in the world.

With over 10,000 shows in 80 countries, The Three Waiters is now arguably the most popular singing waiters act of its kind. Created in 1998, the show changed the face of corporate and private event entertainment forever.

About the Three Waiters
The Three Waiters takes the concept of singing waiters to a new level, adding elements of sophistication, spontaneity, humor and audience interaction.
The Three Waiters have won numerous awards, including being the only act to win Entertainer of the Year twice from Event Solutions Magazine.
It is not a slap stick or improvised waiters show. Everything that happens in The Three Waiters could happen in real life, which is why the audience reacts with complete amazement to the comedy and vocal theatrics.
The Three Waiters includes arias made famous by “The Three Tenors” along with favorite standards and well-known songs from popular musical theatre, and has something for any musical taste. One of a kind.
The Three Waiters is made up of the best performers that opera and musical theatre has to offer. Each artist is chosen after an extensive audition process and not only must be vocally outstanding but must also possess a dynamic personality, with a flair for character acting, timing and comedy.
The Three Waiters singing waiters act works for any event size or demographic. We have received countless standing ovations, including from 5 Royal Families and from The Three Tenors themselves in 2003!

As corporate entertainers The Three Waiters accomplish many goals; to educate, to inspire, and to reward. Singing Waiters not only providing superb entertainment but also a stunning surprise for your event, guaranteed to be an ice breaker. The Three Waiters show is scalable and flexible with audiences ranging from thousands attending sales conventions, to a dozen executives in a company boardroom. The impact is the same and we have helped many companies impress their most important clients.

After a performance of The Three Waiters, everyone in the room has something in common; they have enjoyed a most singularly amazing experience together. This produces an energy and enthusiasm that inspires teamwork and motivation.
Subscribe
© 2022 Platinum Speakers