Sydney’s ultimate party band The Usual Suspects know events – they’ve done their fair share since 2007, and discovered that they love them. As well, as Sydney's only full-time party band, their line-up is consistent on every event - what you see is what you get. No collectives, no gambles, just a full dancefloor. 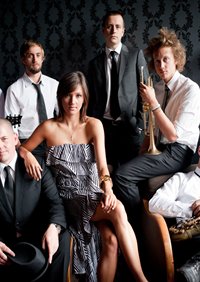 Testimonials for The Usual Suspects

Hi Gus & Alley,I hope you are both well. Apologies I haven’t come back to you sooner but I just wanted to say thank you to the band for doing great job at our symposium, they had everyone up on the dance floor (and we have a tough crowd).

We have another gig coming up, would The Usual Suspects be available on Friday 14 July, its our sales conference. We are expecting about 300ppl to attend, the event will be at Sheraton on the park. If you could let me know that would be great!

Hi Alley, The Usual Suspects were INCREDIBLE!!  They were so accommodating and very flexible with our staff members.  Thank you so much for helping the party be such a success, look forward to working with you again soon.

Hi Gus, Just wanted to let you know The Usual Suspects were fabulous, really professional, entertaining and had been clearly briefed with everything I had passed onto you and Alley. I would definitely book them again. Appreciate your help and patience with our last minute requests and details. Thanks again

Sydney’s ultimate party band The Usual Suspects know events – they’ve done their fair share since 2007, and discovered that they love them. As well, as Sydney's only full-time party band, their line-up is consistent on every event - what you see is what you get. No collectives, no gambles, just a full dancefloor.

The Usual Suspects are one of Sydney's only full-time covers band which essentially means they’re a consistent line-up of Sydney's most in-demand session musicians. Performers all have either a Bachelor or Masters degree in Music Performance (read - very useless pieces of paper in 99% of situations, this is the 1% that it is beneficial in), and formed in 2007 to address a gap in the Sydney music scene - too many bands or 'collectives' were being thrown together for weddings and corporate events without rehearsals, with players who hadn't performed together before and with set lists resembling the worst high-school formal ever held.

The Usual Suspects have been fortunate enough to share the stage with some incredible performers, including Taylor Swift, The Hilltop Hoods, Guy Sebastian, All Our Exes Live In Texas, Peking Duk, James Morrison, Ricki-Lee Coulter, The Cat Empire and Renee Geyer.

“Apart from a series of stories that will one day form a tell-all book that will sell 128 copies, we've learnt through our experience how to read a crowd and engineer exactly the right songs to keep them on their feet all night. Thus, our mantra is quite simple - to have every audience member up and dancing to a world-class performance.”

The good news is that The Usual Suspects play every gig like it's their last, and after delivering more than 500 corporate functions for 250 different companies, they have the innovation, creativity and experience to perfect your next event.