Print
Most Australians remember the horror of a seemingly minor earthquake that rocked the small Tasmanian town of Beaconsfield on Tuesday 25th April 2006. This incident collapsed one of the tunnels in a local gold mine, killing one miner, Larry Knight, and leaving little hope for the survival of the remaining two, Brant Webb and Todd Russell. 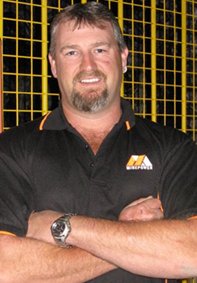 “Feedback was excellent. An emotional story that reminded people why they work in the Safety Industry."

Todd delivered a very personal and powerful message to our work teams while pointing out that safety is everyone’s business and working together is the first step in keeping people safe.  Todd spoke candidly with work teams and in relating his own experiences delivered a powerful message which made being safe a personal thing and our work teams think about the safety impacts for their own lives, family and friends. There were a few tears after the slide show.

Todd was an authentic speaker with a genuine safety story and struck a chord with our audience.

Todd was very well received. He spoke well and the team were engaged from start to finish, first time I have seen everyone silent for an hour straight!

Todd Russell travels from TAS
Fee Range: Up to $5000

Most Australians remember the horror of a seemingly minor earthquake that rocked the small Tasmanian town of Beaconsfield on Tuesday 25th April 2006. This incident collapsed one of the tunnels in a local gold mine, killing one miner, Larry Knight, and leaving little hope for the survival of the remaining two, Brant Webb and Todd Russell.

Miraculously on Sunday 30th April, five days after the mine collapse, 37 year old Brant Webb and 34 year old Todd Russell were discovered alive and huddled together in a tiny bubble of air, without food or water and surviving only on hope and courage.

The world watched on in anticipation for the next nine days as rescue teams worked around the clock to free the men, mindful that the slightest mistake could bring their roof collapsing in on them.

On the 9th of May, rescue workers finally reached the two men and brought them safely to the surface where they walked unassisted, arms held high in triumph. What unfolded after their escape was nothing less than a media frenzy, while television networks, newspapers, magazines and radio stations fought to be the first to bring their incredible story of survival to the world.

That frenzy led to Brant and Todd signing the biggest exclusive television deal in Australian television history, a world wide exclusive book deal, a documentary deal and flying to New York to do a live and exclusive interview with Diane Sawyer on the 'Good Morning America' show.

Brant and Todd's survival together in the most extraordinary of circumstances is nothing short of miraculous, defying all reason and realms of possibility. Their story of mateship, courage and hope is one of the greatest ever told and will be passed down for generations to come.

What is just as incredible is that throughout the entire ordeal, Brant and Todd have used their circumstances to help their community and give back to the people who helped them survive.

These days, both men are getting back to normal life in Beaconsfield and taking advantage of the time they have with their families.

Todd's story reveals in his own words, details of his survival and what kept him alive during those 14 days trapped in a small cage almost a kilometre underground. Todd Russell is an engaging, down-to earth-speaker with a unique and moving tale to tell.

The Beaconsfield Mine Disaster