Print
Tom Moody continues to cast a giant shadow over the game in which he began his playing career for Western Australia in the summer of 1985/86. Tom captained his state to numerous successes and also captained in England where he carried out a... 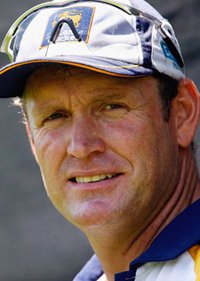 Tom Moody continues to cast a giant shadow over the game in which he began his playing career for Western Australia in the summer of 1985/86.  Tom captained his state to numerous successes and also captained in England where he carried out a distinguished career as an overseas player for both Warwickshire and Worcestershire.

Tom’s international career began in 1987 when he was a member of Australia’s historic first World Cup win, and ended in 1999, just months after he played a key role in Australia’s second World Cup success in England.  In between he developed a reputation as a dependable all-rounder capable of turning a game, either with the blistering power of his bat, or his uncanny knack to snare important wickets with the ball.  His test career was restricted to just eight matches, but in that time he made two centuries – the first in just his second test match, and the second would come on his home turf at the WACA Ground in Perth against India.

At the completion of his distinguished playing career he took on a full time role with Multiplex Constructions, with whom he had been involved on a part time basis throughout his playing career.  Tom then took charge for five years as Director of Cricket at Worcestershire.  His arrival as the County’s first Director of Cricket resulted in an era of success.  After finishing sixth in the second division of the County Championship in 2001, Tom rebuilt the squad and success was to follow.

In June 2005 Tom was appointed Head Coach of Sri Lankan cricket where he took on the responsibility to mount the team’s 2007 World Cup campaign.  During his tenure he transformed the Sri Lankan team into a well drilled professional outfit and quickly gained the reputation as one of the game’s most sought after international coaches.  Outside the One Day arena Sri Lanka rapidly improved its test match record away from home removing a long standing lack of self belief and confidence in the team abroad.


Tom has also represented the Australian Cricketers’ Association as an executive and was soon after appointed President by his peers in 2000.  He has also been awarded numerous awards including Wisden Cricketer of the Year 2000, Australian Sports Medal in 2000, and the Centenary Medal in 2003.

Tom returned to Perth after a successful reign as coach of Sri Lanka to take on the role of Manager/Coach of the Western Warriors which he carried out for 3 years.  Deciding not to extend his contract Tom was interested to pursue roles in the media and taking on smaller consultancy coaching roles. Over the recent past he has worked with some of the world’s leading broadcasters in radio and television.  Recently he had the honor of being in the exclusive team covering the 2011 World Cup final in India for ESPN.

Tom has had a regular involvement with the Indian Premier League (IPL) as head coach of Kings XI Punjab in the first 3 years and recently as an expert commentator in the latest edition 2011.

Tom has had many experiences over his career as a player and coach at the highest level and recently as a commentator of the game.  Over the past 25 years being involved at the professional level Tom has seen many challenges in the sporting world and recognizes there are very similar situations out there in the corporate world which allows him to offer a unique view.

Real leadership – an insight to some fascinating leadership examples of former Australian captains and view on the key ingredients in the makeup of good leaders and leadership.

Game changers – relating to the those real geniuses in our work place and what makes them so special in their field, an insight into some of crickets real game changers and how they manage to always step up during those big moments.

Competitive advantages – a look at how the game has changed over the past two decades and how this change has affected the game. Also a close look at how we need to continue to make changes to our team to gain that edge.

Definition of a champion team – a real insight into what makes the best teams in the world tick and how they seem to have that competitive edge against their peers.

General sporting anecdotes – an insight to some of the characters and stories that have been experienced over the years of playing and coaching at the top level.