Print
Tony Fernandes is the Director and Founder of Malaysia’s second largest airline, AirAsia Berhad, which commenced its operations in December 2001. Also the Group Chief Executive Officer of AirAsia, the leading low cost airline in Asia,... 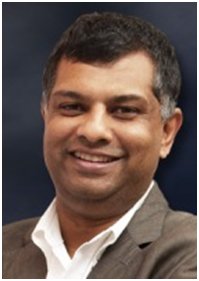 
Tony obtained his early education in Epsom College, UK and pursued his studies in Accounting from the London School of Economics. He started his career as the Financial Controller at Virgin Communications London from 1987-1989 and Senior Financial Analyst at Warner Music International London from 1989 to 1992. He was then appointed as the Managing Director at Warner Music Malaysia in 1992 and Regional Managing Director, Asean in 1999 and Vice President, Asean at Warner Music South East Asia.
Tony was admitted as an Associate Member of the Association of Chartered Certified Accountants in 1991 and became a Fellow Member in 1996. In recognition of his contribution to the Malaysian music industry, he received the title ‘Setia Mahkota Selangor’ from Duli Yang Maha Mulia DiPertuan Agong, Sultan Salahudin Abdul Aziz Shah in 1993 and in 1997, the Recording Industry Association of Malaysia has honored him with ‘Recording Industry Person of the Year 1997’. In July 2005, Tony was conferred the Darjah Datuk Paduka Tuanku Ja’afar (DPTJ) which carries the title Dato’ by the Negeri Sembilan’s Yang DiPertuan Besar Tuanku Ja’afar Tuanku Abdul Rahman in conjunction with His Majesty’s 83rd birthday in recognition of his services rendered to the betterment of the nation and community.
Tony Fernandes joins the ranks of 237 of the world’s elite leaders in ‘Young Global Leaders’, an organization for individuals who have committed their knowledge and expertise to engage in major global undertakings to shape the future. Tony is the recipient of the International Herald Tribune award for the Visionaries & Leadership Series, for his outstanding work in AirAsia. In Dec 2003, Tony was named “Malaysian Chief Executive Officer of the Year 2003” by American Express and Business Times. In 2004, he garnered the Emerging Entrepreneur of the Year – Malaysia 2003 Award by Ernst & Young, and was also named Asia Pacific Aviation Executive by the Centre for Asia Pacific Aviation (CAPA) for the year of 2004-2005.
A familiar face in the aviation industry as well as on an international level, Tony has headlined the covers of Airline Business magazine, Asian Wall Street Journal, New York Times, International Herald Tribune, and featured on countless international publications such as South China Morning Post, Financial Times, Far Eastern Economic Review, The Economist, and many more. Recognized for his unique leadership and entrepreneurial skills, Tony was named BusinessWeek’s 25 Stars of Asia in 2004. In 2005, AirAsia made it to Forbes’ annual listing of the “Best under a Billion” companies in Asia.
Most recently Tony was named the winner of Airline Business Strategy Award for Regional and Low Cost Leadership by Airline Business and the Master Entrepreneur category of the Ernst & Young Entrepreneur of the Year – Malaysia 2006. He also bagged the 2006/07 ‘The Brand Laureate’ Brand Personality for his exemplary performance, dedication and contribution towards the aviation industry in Malaysia.
With the motto “Believe the Unbelievable, Dream the Impossible and Don’t Take No for An Answer”, Tony Fernandes and his team has revolutionized and led AirAsia to be an amazing, world class, home grown airline.
Subscribe
© 2022 Platinum Speakers