Tony Popovic is an Australian former football player who is the current head coach of A-League club Western Sydney Wanderers.  Tony has an unparalleled record of success and is a sought after speaker. Tony’s messages on leadership, change, communication and culture are clear, leaving audiences motivated and highly engaged. 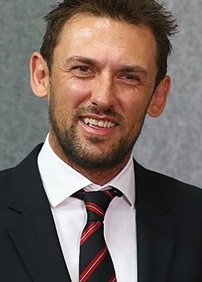 Tony Popovic is an Australian former football player who is the current head coach of A-League club Western Sydney Wanderers.  Tony has an unparalleled record of success, unique experience and regular public presence in Australia and internationally.  As a sought after speaker, Tony’s messages on leadership, change, communication and culture are clear, leaving audiences motivated and highly engaged.

Australian Tony Popovic is a former very successful English Premier League player, captain and assistant coach who made history when, on 1 November 2014, as head coach/manager of the Western Sydney Wanderers Football Club, he won the Asian Champions League (ACL) against clubs with budgets many times greater than the Wanderers. This was a remarkable feat when one considers that it was achieved on Tony's first attempt.

Most people do not realise that Tony Popovic’s success as a coach/manager post a very successful playing career is unsurpassed in world sport. Sir Alex may have achieved something similar with Aberdeen but what Tony Popovic has done is factually even more impressive:

·         He is the first coach in the world from any professional team sport to win the Premiership in the same season that the team was formed and entered into an already existing professional competition.

·         He is the first coach in the world to win any continent’s Champions League (or equivalent competition) on his first attempt.

·         He won the Asian Champions League with a player roster that was 30% smaller than his Asian competitors, and won 4 ACL quarter final and semi-final matches while playing during his club’s off season while all of his Asian competitors were playing these matches during their season proper.

·         He captained English Premier League club Crystal Palace (eventually becoming their assistant coach) and played at the 2006 World Cup as a team member of what is regarded as Australia’s “Golden Generation”.

Starting from literally nothing in April 2012 and assembling a squad the football media and most “football experts” regarded as most likely to finish towards the bottom of the table, Tony Popovic has led the Wanderers to becoming the most successful football club in Asia whose culture is revered and considered preeminent in Asian sport. In terms of results, public engagement and atmosphere, they are on par with the best clubs from any other sporting code. By any standard, this is an incredible achievement by a club that did not have any players in April 2012.

Tony Popovic’s achievements are best summed up when you consider the calibre of coaches that have failed in their attempt to win the Asian Champions League - Felipe Scolari, Carlos Queiroz and Zico.

Having previously guided his team to consecutive A-League grand final appearances in their first two seasons of existence, in May 2015 the Western Sydney Wanderers re-signed Tony Popovic on a three-year deal which will see him lead the Wanderers through to the end of the 2017-18 A-League season.

Described by Wanderers chief executive John Tsatsimas as "... steadfast, determined, meticulous in detail and an intelligent coach whose entire focus is on the success of this football club," Tony Popovic's unparalleled record of success, unique experience and regular public presence in Australia and internationally make him an ideal choice as leadership and motivational speaker.

With Tony Popovic’s unparalleled record of success, unique experience and regular public presence in Australia and internationally, he would be an ideal public speaker on any topic related to leadership of a successful organisation, whether that be motivation, team and culture building, different forms of leadership, managing change, communication, learning and development, teaching, recruitment and deployment of talent, and media relations, amongst many other management related topics.