Print
When two livewire students first got together at Drama School, the result was a broken nose. Undeterred, they stayed mates and their subsequent collaboration has become one of Australia's biggest comedy exports. With their zany mix of mime…with sound, the Umbilical Brothers have audiences around the world rolling in the isles. 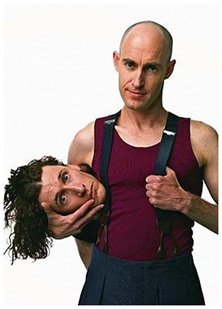 “wildly funny, wildly creative...they truly seem to be psychic twins, joined in an irresistible conspiracy to commit comedy...inspired anarchy...silly behaviour of the highest calibre...you’re left only to shake your head and marvel.”

“twisted and absolutely hilarious...a hell of a good time”

“fast, inventive, cheerfully crude and wittily self aware, thwak might be classified as performance art, but we call it pure theatre and pure fun”

‘the umbilical brothers’ “thwak” is hard to describe but easy to love...high points include the abuse of latecomers and a puppet show involving a bunny and a mallet. Even if you think you hate mimes, you won’t hate ‘thwak’.”

‘my faith in comedy was restored. If you thought Lee Evans was the last word in physical humour, Collins and Dundas raise the stakes a hundredfold’

“over the course of 90 insanely inventive minutes, they both exceed and subvert our expectations of what two wiry men can do with a bare stage and a microphone”

The Umbilical Brothers are an international comedy phenomenon. Named as two of Entertainment Weekly’s “100 Most Creative People In Entertainment”, David Collins and Shane Dundas have appeared on Letterman and Leno, after James Brown at Woodstock ’99, and before the Queen.

Their unique fusion of physical and vocal comedy has taken them to stadiums supporting Robin Williams and brought comedy audiences into the Sydney Opera House. They’ve also gained a fanatical toddler and late-night, potato-chip-eating college fan base with their television series The Upside Down Show, The Sideshow and Maisy.

They’ve performed in over 35 countries. From Hawaii to Tokyo, New York to Moscow, audiences have laughed like idiots at their acclaimed performances that use a fast-paced mix of movement, vocal sound effects and verbal interplay to cleverly twist theatrical rules and everyday situations into comedy triumph. Before creating their own YouTube channel last February, they had close to 100 million hits.

Their appeal crosses generations, as children in the audience are as enthralled by the physical comedy as the adults, while the more complex material hits its grown-up targets. The result: an entertainment that is as critically praised as it is loved by a broad audience.

Their stage shows, TV work and multi–platinum DVD’s have won them applause and critical acclaim ranging from the internationally impressive to the entirely insignificant. Awards include two BAFTA’s (one while working with Academy Award-winning Aardman Animations), an EMMY, a Logie (Australian Emmys) and a Helpmann (Australian Tonys) for Comedy Performers of the Year. They’ve also received an Edinburgh Critics’ Choice Award, won the Australian Entertainment Industry’s MO Award for Best Comedy Group 5 years running and, for their work with MTV, gained a Promax Award – whatever that is.