Print
Born of a Tongan mother and Australian father, Vika and Linda grew up in Victoria but maintained close links to the Tongan community. As children they were always around music and enjoyed singing with the family and also at the Tongan church they... 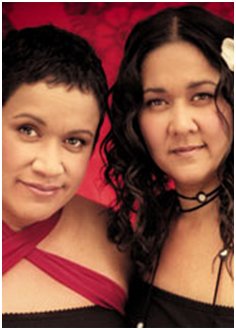 Born of a Tongan mother and Australian father, Vika and Linda grew up in Victoria but maintained close links to the Tongan community. As children they were always around music and enjoyed singing with the family and also at the Tongan church they attended. They learned singing and harmonies from their mother, but they both have had musical training - Vika actually had singing lessons for a couple of years as well as learning to play the piano and read music.
They both enjoyed singing and when in 1984 Vika was offered a job as a backing singer with a Melbourne band called Fear of Flying, she jumped at the chance. She stayed with them for two years before moving onto another band called Sophisticated Boom Boom.
Their big musical break came in 1988 when Joe Camilleri took the girls into The Black Sorrows as backing singers - this is when the girls profile was raised. Vika was prominent on a couple of their big singles and their reputation grew. During their time with the Black Sorrows, they also performed on other people's songs - people such as Hunters and Collectors, John Farnham and Archie Roach. Whilst working on the Archie Roach CD, they met and started working with Paul Kelly.
After 6 years with the Black Sorrows they felt it was time to take the next logical step, which was to be lead singers in their own band. They had enough material and wanted the opportunity to perform it. So in 1994 they left the Black Sorrows and took their music to audiences at places like The Esplanade and the Cherry Tree - at this time they were playing covers of Country songs and started to introduce their own songs into the sets. The reaction to their music was very positive and with that came confidence in what they were doing and they started refining the material for their first CD.
A career in the music industry that has surpassed decades and it hard to find nowadays. With the evolution of the disposable pop idol, longevity is not something that most artists can aspire to.
Not only have Vika & Linda Bull proved themselves household names since their big musical break with Joe Camilleri and The Black Sorrows, they’ve cemented their imprint on the Australian music scene with a dedicated touring focus which is still going strong
Subscribe
© 2022 Platinum Speakers