Are you looking for a unique keynote speaker to inspire the people attending your next conference? The Unbreakable Farmer is your man.  Resilience, Persistence and Determination are words used to describe Warren Davies but he is also is a husband, father of 5, son, brother, mate, and normal bloke down the road. 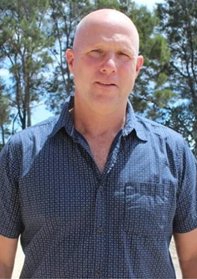 Warren was our Key Note speaker at the recent ANZ Business Banking Summit in Melbourne. His story emotionally touched the audience of 250- hitting rock bottom and the climb out was an inspiration to us all. More importantly, Warren shared the key factors in his recovery- Family and community support as well as the willingness to talk. As Bankers, we see many situations with individuals under emotional stress. The hour we spent with Warren was invaluable in helping identify mental health issues and more importantly, giving us better understanding and providing the pathways to seek or help others seek help. Well done Warren. I’m happy to endorse Warren and recommend him to be part of your next team meeting.

Warren presents a confronting, honest and inspiring story of resilience and strength as a former farmer in Northern Victoria. It was an eye-opening discussion that was extremely beneficial for our administrative staff who communicate with farmers daily - it was certainly a lesson in empathy. We all took a great amount from Warren's talk with us, and his down-to-earth speaking style made it very easy to engage with him. I think any organization or group would benefit from speaking with Warren and hearing his story.

I listened in awe at Warren’s presentation “The Unbreakable Farmer” at a recent conference and it provided myself and the listeners with an emotional “Real Life” experience and how he dealt with the challenges that he faced and through courage to tell his story, he was able to overcome these challenges Inspiring and Motivating, I would highly recommend Warren to talk at any function.

Warren is a warm, considerate and affable speaker that relates well to people. He has many strings to his bow with both the Love me, Love you and Unbreakable Farmer titles in his stable. The big thing for our school and our kids was his understanding of country life and how they could relate to him and what he had gone through. Most farming kids had gone through the same and were well aware of the difficulties of farming life. He has a fantastic story to tell and it has been one of my favorite presentations for our school. So much so, we want to get him back to talk to the parents as well. Thanks Waz.

Warren spoke at our workshop day in January 2016 and he delivered an emotional, inspiring & honest presentation to a room full of men,

Warren showed the audience how an everyday guy can crash and burn but also recover magnificently. Warren is a truly inspiring individual with a story worth listening to. Keep up the great work Warren.

Warren's presentation at the 2018 Elders Financial Planning conference was both moving and inspiring. Warren's courage in regularly sharing his story in overcoming adversity and his determination to build a better life has motivated many to seek support and improve their own lives. I recommend including Warren, the Unbreakable Farmer, as a speaker at your next Conference.

Warren Davies travels from VIC
Fee Range: Up to $5000

Are you looking for a unique keynote speaker to inspire the people attending your next conference? The Unbreakable Farmer is your man.

Resilience, Persistence and Determination are words used to describe Warren Davies but he is also is a husband, father of 5, son, brother, mate, and normal bloke down the road.

Warren’s authentic, inspiring and sometimes confronting presentations are filled with take home strategies developed from his business and life journey that his audience can implement in their day to day life to overcome challenges or pick themselves up and keep moving forward. His message is simple and so very important at a time when stress is seen as normal and depression is commonplace.

Warren will change the thinking and behaviour of your most precious resource, your people.

A leader throughout his Primary School years, this confidence was eroded once entering Secondary School, where he was subjected to bullying and not fitting in. His academic achievement began a downward spiral. This is where his skill of Resilience was developed a skill that would be called upon time and time again in future years.

In 1982 His family made the massive decision to move to the country and pursue his father's dream of becoming a farmer. This gave Warren an opportunity to reinvent himself. A direction, a career path: he was going to be a Farmer! Mentored by one of the best farmers in the district, Warren honed his skills and, by the age of 22, he had purchased his first farm.

The next sixteen years were to be defining years for him. The harsh reality of being a farmer soon became evident: high interest rates, low commodity prices, flood and drought; all having an impact, but most significantly, was that on his mental health. These events all tested his Resilience, Persistence and Determination and had a massive impact on his young family, relationships and finances all culminating with the decision to basically having to walk off the farm.

Although with his skills, work was easy to find, managing large scale operations from Victoria to South Australia, it wasn’t the same, he couldn’t settle, he assumed that he had lost his identity because not only was the farm his career, it was his home, his life! In his eyes he had failed and carried the guilt of failing as a husband and father.

Being an avid reader of books he searched for a better way, he began the journey of piecing back together his life, but the road has been long, through his Resilience, Persistence and Determination, he now imparts his skills and pays forward his unique stories, their moral relevant to all ages, from the country to the city, a farmer or the CEO of a large corporation.

There is more to this farmer than meets the eye.

His keynote topics are centred on resilience, persistence, determination, leadership and wellbeing, their moral relevant to all ages and communities. Warren’s ability to engage with individuals or organisations is through the journey of him piecing back together his life and the life lessons he learnt along the way. His down to earth approach makes his story and strategies relevant whether you are from the country or the city, a farmer or the CEO of a large corporation.