Print
Yassmin Abdel-Magied  questions why we don’t hear more diverse voices in our communities, in our politics and in the media. She leads by example, breaking moulds and smashing stereotypes at every opportunity, all over the place. Yassmin is an enigma: a mechanical engineer, a highly articulate social commentator, incredibly stylish and, by her own admission, a raving petrol head. 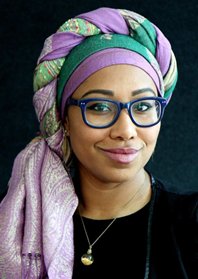 Your talk was absolutely superb, and I thought you might be interested to know that we asked attendees to fill in a short survey following a snapshot of which is below:

· 97.1% rated your presentation/delivery as good or excellent – 87.14% of which was in the excellent column. This was, by far, the highest marks received by any speaker on the day.

Yassmin delivered a keynote address to a group of 400 senior global managers. She maintained the attention of the group by delivering a set of simple and powerful messages in a very personal and compelling way. She has developed a level of insight and maturity well beyond her years.

Excellent, Yassmin was a great speaker and had the room in the palm of her hand for the duration of her inspirational presentation.

“Yassmin is such a natural and gifted presenter - her fierce intelligence, her empathy and her humour made it one of the best stage presentations I’ve ever seen.”

Yassmin Abdel-Magied  questions why we don’t hear more diverse voices in our communities, in our politics and in the media. She leads by example, breaking moulds and smashing stereotypes at every opportunity, all over the place. Yassmin is an enigma: a mechanical engineer, a highly articulate social commentator, incredibly stylish and, by her own admission, a raving petrol head.

Debut author at 24 with the coming-of-age-memoir, Yassmin’s Story, the 2015 Queensland Young Australian of the Year advocates for the empowerment of youth, women and those from racially, culturally and linguistically diverse backgrounds.  Yassmin is passionate about making 'diversity' the norm. At age 16, she founded Youth Without Borders, an organisation that empowers young people to realise their full potential through collaborative, community based programs.

Yassmin was named one of Australia’s most influential engineers by Engineers Australia, and has been recognised for her work in diversity by the United Kingdom’s Institute of Mechanical Engineers. The youngest woman named in Australia’s 100 Women of Influence by the Australian Financial Review in 2012, Yassmin was the Young Muslim of the Year in 2007 and Muslim Youth of the Year in 2015.

A sought-after advisor for federal governments and international bodies, Yassmin currently sits on the Boards of ChildFund, The Council for Australian-Arab Relations (CAAR) and the domestic violence prevention organisation, OurWatch.  She is the Gender Ambassador for the Inter-American Development Bank and has represented Australia through multiple diplomatic programs across the globe.

You can also find Yassmin presenting on TV, currently hosting ABC's weekly show, Australia Wide.  She is a regular on Q&A, The Drum, The Project, and internationally on the BBC.  On radio, Yassmin is a regular on Triple J's Hack, Radio National, and moonlights as a casual broadcaster on ABC Local.   She is the host of the motorsport podcast Motor Mouth,  and is the host for the groundbreaking documentary The Truth About Racism, due for release in March 2017.  Yassmin's TED talk, What does my headscarf mean to you, has over 1.5 million views.

Yassmin has written extensively, her writing appearing in The New York Times, The Guardian, The Sydney Morning Herald, AFR, The Griffith Review, Huffington Post and others.

Beating Bias - Unconscious bias, diversity, the importance of diverse teams and how to challenge and change our workplaces and communities

The School of Life - Leadership at a young age, Starting an NGO while a teenager, the lessons in running NGOs and diverse teams, working with young people, international development lessons from a young age

Gender and Engineering, Gender and Infrastructure - How do we take gender into account in areas where we traditionally haven’t split down gender lines?

Changing and Creating Culture in Workplaces and Communities

The Role of Faith and Culture in Leadership and Society

Social Trends and Change - What will the world look like in 20 years and what do we need to do about it?